This time round we will be looking at a particular favourite of mine, recently released in trade form: ‘Cry Havoc’. 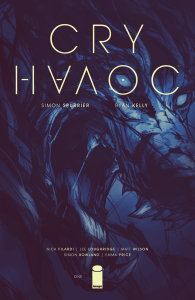 I first encountered the work of one Mr Si Spurrier when reading ‘Crossed: Wish You Were Here’, the online exclusive (at the time anyway, you lucky folks can buy all four volumes of it now) tie-in to Garth Ennis’ pseudo-zombie horror title. I was lucky enough to meet Si (I’m sure he won’t mind me being informal) at a convention in London, I think it was London Super in one of the very early years, and enthused over his book *somewhat*, before telling him about the night terrors that it induced in me. That’s right, I fan-girled over a book then admitted that it literally gave me nightmares. Proper, waking up sweating and screaming, not being able to sleep for another two hours, nightmares. We’re all normal here… I think he was a little taken aback, but was generous enough not to have me carted off to the Bethlem Royal, bless his cottons. Anyway, I digress, the long and short of it is that since then I have been a sucker for any title with the name Si Spurrier attached to it, in any way shape or form. Which brings us nicely back to ‘Cry Havoc’…

When I spotted on twitter that there was a new Spurrier title coming out, with the brief treatment of “it’s not about lesbian werewolves going to war, except it is”, I knew that I was in for a ride. What a ride it turned out to be, too. With some body horror, some moral dilemmas, a dash of the usual Spurrier wit and a few top-class puns for good measure (why yes, now that you mention it, the trade is subtitled Mything In Action! Why yes, I thought that was jolly amusing, too!), how could I not love this book? Plus, it gives full credit to everyone that has worked on the book, meaning that there were a lot of titles on that front cover, and for good reason… 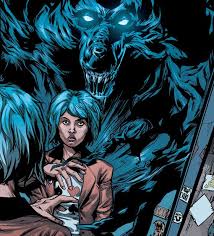 The designer of the book is Emma Price and she has done an outstanding job of making sense of a fractured narrative, given that the story starts at the end then moves to the beginning, before aiming for somewhere in the middle, then rinse and repeat…! It is not often that you see the book designer given credit on the front cover, but that credit is very much due in this case, as the book would either make less sense, or be less fun to read, I’m not sure which, without Ms. Price’s gently guiding hand on it.

Although all the art is all produced by the Ryan Kelly (also the artist on Saucer County, another title from Paul Cornell, insert blatant plug for earlier column here) the creative team made the unusual, but wholly brilliant, choice to use three different colourists on the title, with each given a different location and timeframe to match the section of the book they are working on. This will make sense when you read the book, which of course you will now that I’m telling you how great it is… I’m trying not to give too much away you see, as one of the joys of “Cry Havoc” for me was the sheer number of “holy s&%t!” moments when the next reveal or surprise some along.

Each colourist, Matt Wilson, Lee Loughridge and Nick Filardi, commits themselves wholly to their timeframe (back to the end, beginning and middle thing again), with each choosing a single colour to base their palette on then working those often single colour toned panels to perfection, making the art of Mr. Kelly pop and change in ways that you allow each section of the story to become something more than a segment, each could become a story in it’s own right, were it not for the one character who appears in all three timelines. 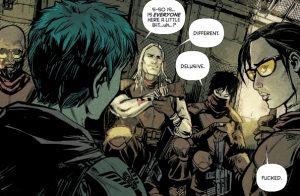 Our lead character – not to give too much away – isn’t exactly likeable (in fact at times she’s basically a bit of a d!*k) but you find yourself warming to her as you find out more about who she really is (now) and where she has both come from and gone to. I cannot recommend this book highly enough, as it ties in myths, legends and fairy-tales from all around the world, each issues’ back matter alone is worthy of its own book, plus the fact that I was lucky enough to procure all single issues with Fiona Staples variant covers, make this a sure fire win in singles, or in trade. The art is beautiful, the colour work to die for, and the writing makes this the kind of book you can find something new in every time you go back to read it. I’ve spent more hour researching online because of the characters and the back matter in this book than in anything else I have ever read. In fact, why are still reading this, go on, go and read ‘Cry Havoc’… shoo!