The Importance of Kate Bishop
By Tyler Edwards 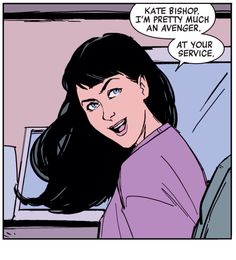 Kate Bishop has done a lot in the first 21 years of her life. She’s been a Young Avenger, she’s led the Young Avengers, she’s taken down aliens, Dr. Doom, Russian mobsters, and moved to Los Angeles with Clint Barton’s dog. Which is to say, I believe Kate is currently one of the most important characters in Marvel Comics. As the co-protagonist in Matt Fraction’s Hawkeye, she is Clint’s voice of reason and very much his equal, mentally and physically. In Young Avengers, she is the team’s leader and stability. Her lack of superpowers is never something that holds her back—Kate is everything you imagine in a strong, confident, and empowered young woman.

One of the events that led Kate to become a member of the Young Avengers was her being attacked in Central Park. While it is never stated outright that the assault was sexual, during an interview Jessica Jones tells Kate that she understands what she is going through, because something similar happened to her (a reference to Jones’ origin story in Alias). To help herself through this intense personal trauma, Kate takes up martial arts, archery, and swordplay. While this period of Kate’s backstory is never discussed in detail, it contributes to the complexity and strength Kate shows throughout both series, while also tackling the issue of violence against women with unusual sensitivity. 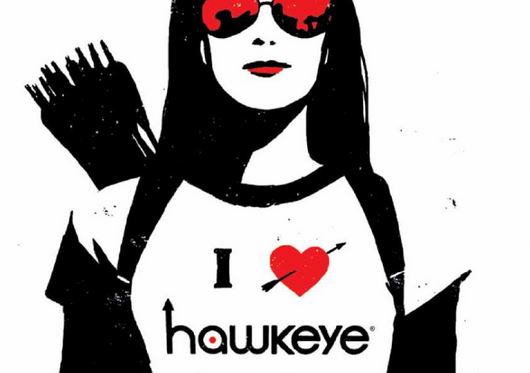 One of the best things about Kate’s identity at the beginning of Young Avengers is her struggle to find a codename. Her teammates suggest names like ‘Weapon Woman’ and ‘Hawkingbird’, only to have Captain America gift her Clint Barton’s old bow and arrows, with a note addressing her as Hawkeye. What is so significant about this is that she is not referred to as ‘Lady Hawkeye’, ‘Hawkette’, or ‘Miss Hawkeye’—she’s just Hawkeye. She takes on the mantle without it having to be adjusted for her gender. She’s not a spinoff or a sidekick, she’s the real deal, as is borne out by her eventual leadership of the team. 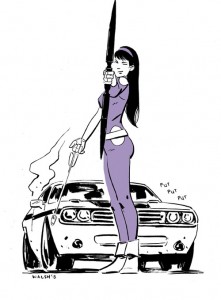 During her time with Clint Barton, set between the two runs of Young Avengers, in Fraction’s Hawkeye book, Kate is first depicted as Clint’s pupil, there to learn from him. It becomes clear fairly quickly that he has as much to learn from her as she does from him. Kate is what keeps Clint grounded through the first few arcs of the series—she is developed from sidekick to partner very quickly, saving him on numerous occasions and being the strategist behind many of their schemes. It is also refreshing to see their relationship stay purely platonic, their witty sibling-like banter showing a type of friendship rarely depicted in comic books. But even the best friendships hit hard times. Eventually Kate gets tired of Clint’s negativity and secrecy, and heads out to Los Angeles for some space and to clear her head. During this arc we get to see a different side of her. Instead of having to be the adult in her relationship with Clint or as leader of the Young Avengers, we get to see the young, fun, and goofy side of her. She ends up doing some investigative work for a sweet older gay couple whose flowers have been stolen right before their wedding. Naturally hilarity, action, and drama ensue, with Kate never losing her smarts or independence along the way.

Kate is also distanced from the tired tropes of comic-book misogyny by her sexual agency. In the first series of Young Avengers her costume is fairly provocative: it’s tight, purple, and shows off her midriff. While it does seem functional, it’s clearly designed for the male gaze. However, though she is ostensibly a ‘hot girl in a sexy outfit’, she retains her own personhood and is not defined her relationships or by the stereotypes so often attached to women in comics. During the second run of Young Avengers, she’s shown to be in a casual relationship with Kree playboy, and eventual team member, Noh-Varr. Throughout this relationship, Kate turns the rhetoric of male chauvinism on its head, at one point telling Noh-Varr to “be pretty and silent.” Nor-Varr is frequently drawn shirtless, showing off his traditionally ‘super-heroic’ musculature. This objectification of a male character through the female gaze is a nice reversal of the hypersexualzation usually reserved for women in comics. The same can be said for her time with Clint, as well. Kate is never sexualized, typically shown in jeans and a jacket, or her surprisingly non-formfitting hero attire. Conversely we see Clint shirtless plenty of times, and even a bit more on other occasions. It would be easy to argue that he, not Kate, is the one being objectified in the series.

Kate Bishop is everything one might want a strong female character to be—not just in comics, but in any medium. Her femininity, or sometimes lack thereof, is never a point of weakness or shame. She is a warrior because she chose to be a warrior, not because it was forced on her, or because she was randomly drank a radioactive soft drink. Even without powers she has proven herself as the leader of a team of superheroes, and has even shown a seasoned member of the Avengers a thing or two about archery, quick wit, and friendship.