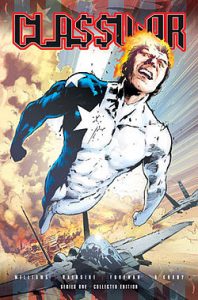 “Holy Sh*t.” This was my reaction when I saw DC had tapped Rob Williams to be the new writer of their Rebirth Suicide Squad, with none other then legendary artist Jim Lee. No doubt this is a book DC is putting a lot of weight behind with the movies recent release  so I was surprised that DC had not put one of their top tier writers on the book. Instead they have entrusted it to Rob Williams. Some of you may know who he is from his 2000 AD work and or his new 52 Martian Manhunter series, to others this may be your first experience reading his writing, but for me Rob Williams is always going to take me back to Cla$$ War (no, I did not misspell it).

2002 was an unsettled time in America. 9/11 was still an open wound and fears of the next attack weighed on our minds. It may not have been the time for commentary on the US political system but none the less Cla$$ War was just that. Com.X was a small British publishing house with grand plans that unfortunately never panned out, much like their series, but it did give us Cla$$ War, which was a beautiful book.

Cla$$ War is the tale of the super team Enola Gay, named for the plane that dropped the atomic bombs on Japan to end WWII. Since 1981 Enola Gay had been the point of the spear for America’s military machine. Lead by the American, an idealistic super soldier who still believes in the American dream. Surrounding him on the team are more corrupted super beings, many of them analogs to more recognizable heroes. When an aged spymaster, Isaac, shows the American the secret political interests his team is actually serving he goes rogue to show all Americans the truth, even if it is searing “Liar” into the presidents forehead. Hunting the American and Isaac will be the rest of his team, all of whom are much more in tune with their American masters. The book delves into political corruption, the growing divisions of the haves and have not’s, who the government really works for, the CIA drug sales in the United States, and the imperialistic desires of the American military as well as well as how idealistic Americans can overcome in today’s world.

I enjoyed Cla$$ War, I still do. Unfortunately the book never reached the potential it should have. First it was delayed due to the 9/11, understandably since most Americans weren’t ready for British creators to be commenting on an American corrupt political machine. The first three issues were released in early 2002 with lovely art by Trevor Hairsine who has been doing some incredible work as of late for Valiant. Then the delays hit. Com.X offices were robbed. Marvel grabbed Hairsine as one of their young guns. Cary Nord was going to take over, and in my opinion would have fit the book better, but Dark Horse offered him Conan with Busiek. After more then two years Cla$$ War returned with Travel Foreman on pencils. I like Foreman, his recent stint on Animal Man & JLU were excellent and I’m looking forward to his Ultimates run but his art was a departure from Hairsine’s pencils but the story holds up and even with inconsistent art the book is very enjoyable and any reader who enjoys political thrillers, conspiracy theories, and over the top action should check out Cla$$ War. Luckily a few years ago Com.X managed to put out a hardcover collection with some added Hairsine pages and all six issues are available on Comixology 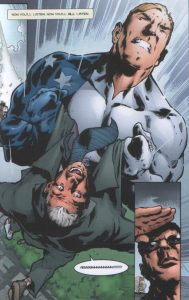