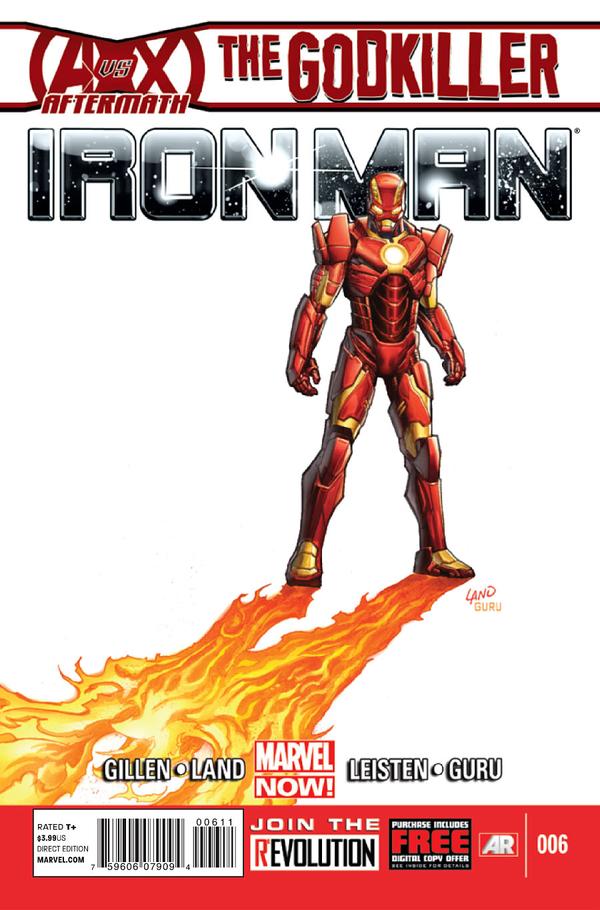 Now that Tony has dealt with the Extremis strain, he’s decided to open up his horizons and venture out into deep space. After battling some attacking aliens, Tony ends up in a space bar where he learns all about this world he’s currently visiting, the aliens he attacked and the extent of his new AI P.E.P.P.E.R. (who has no trouble blindsiding him like the real Pepper). After some intergalactic flirting with one of the patrons, she takes him back to her place. Before anything can happen though, Tony is ambushed by the local authorities and find that he might be in some serious trouble.

You can really tell Gillen is enjoying writing the character of Iron Man. While the Extremis “Believe” story might have been on the more serious side, in “Godkiller” you really get a sense of the direction Gillen probably wants to take with the series, which mixes action and humor really well. Utilizing some of the remains of AvX, creating a whole new world that could be affected by it, and getting Tony there takes a lot of work and Gillen makes it seem easy. It’s also nice to see that he’s working on something completely unique and away from what has been established in the past, which turned some longtime fans off when the series first started. It’ll be interesting to see how this story plays out and I look forward to seeing how it does.

I’ve certainly had issues with Greg Land’s art in the past, mostly when it comes to dealing with people from the neck up, but I have to say that issue #6 is an incredibly large step in the right direction. While the horrendous, recycled, airbrushed faces are still there, it’s more than made up for by the beautiful set pieces and wonderful atmosphere that he displays throughout the issue. Land has created this world for Tony to visit and the scope, structure and design of everything is amazing. You really feel drawn in and engrossed in the world. If you can get past the faces, this is probably some of Land’s best work in a while.

While not perfect by any means, Iron Man #6 is a great jumping-on point and re-introduction to the series that fans of Tony Stark should definitely check out. With Iron Man in space, it’s opened up a lot of unique and interesting directions for the series to take and the “Godkiller” story is definitely one of them. If nothing else it’s really intriguing to see how far spread the Phoenix really was and what kind of influence it had in the universe. Land’s art, while still marred with his infamous faces, is a definite step in the right direction and features some amazing set pieces that really engross you in the story. If you weren’t on board before, now is the perfect time to check out Iron Man.