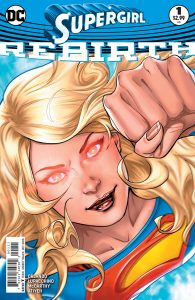 Once again, Kara Zor-El finds herself being hurled into space. The last daughter of Krypton is powerless and heading straight for the center of the galaxy. Earth’s yellow sun will either “reboot” her cells or burn her alive. Meanwhile back on Earth, Kara’s adoptive parents and D.E.O. teammates are forced to defend themselves against another of Krypton’s few survivors. Can Kara make it back in time to save the day – better yet – can she even save herself?

Supergirl: Rebirth is yet another impressive addition to DC’s Rebirth line up. Issue writer, Steve Orlando is probably best known for his work on the critically acclaimed series Midnighter. In addition to being DC’s first book to feature a gay male character in a titular role, Midnighter pushed boundaries with over the top violence and realistic depictions of casual gay sex. This made Orlando a bold and unexpected choice for rebooting DC’s most wholesome superheroine, nonetheless Supergirl: Rebirth is dipped in positivity and covered in sprinkles. With this issue, we see a restoration of Kara’s core values. She is presented as courageous, fun, and optimistic. Orlando’s writing makes it clear that hope will always lead the way for Supergirl.

With DC Rebirth, creators have been restoring legacy and optimism to the DC universe. Few characters were better positioned for these efforts than Supergirl. Like many of her superheroine sisters, Kara Zor-El lacks a strong backstory. Since her silver age introduction, she has been fridged, poorly rebooted, and squeezed into many ridiculous costumes. While the character has taken part in some of DC’s biggest storylines, it’s difficult to pinpoint a definitive comic book characterization. This makes the aggressively positive T.V. series all the more impressive, having developed an iconic representation of the character and making it a natural source of inspiration for a comic book reboot.

Supergirl: Rebirth plucks several elements from the T.V. series without feeling like a product of corporate cross-promotion. We see Kara being placed in the care of Eliza and Jeremiah Danvers and adopting their last name for her pedestrian alter ego. The book also defines National City as Kara’s new base of operations and establishes her connection to the Department of Extra-Normal Operations. Additionally, Supergirl’s uniform is now a modified version of the one worn by Melissa Benoist; it gives Kara a look that is age-appropriate and effortlessly adorable.

While Brian Ching will be the series artist moving forward, Supergirl: Rebirth is drawn by Emanuela Lupacchino. Her art contributes greatly to the issue’s light and playful tone. In the more kinetic moments, Lupacchino illustrates a terrific sense of space. Her action scenes have a degree of whimsy that imbues a sense of adventure without descending into serious violence. It’s clear that Lupacchino has had plenty of practice drawing Kara. She worked on the title’s previous run as well as the Adventures of Supergirl, the comic adaptation of the T.V. series. Lupacchino’s art is a perfect fit for this issue; it’s a shame that she will not be continuing as the regular artist.

This issue concludes with some cleverly placed exposition that serves as a prologue for the upcoming series. Kara Zor-El has dedicated herself to protecting the Earth and all of its inhabitants. To do that she must live, learn, and explore life as Kara Danvers. The future is clear; there will be plenty of biceps and billowing blonde hair.

Buy – DC Rebirth, yasss! It’s all about locating the non-negotiable traits within the core of a character and putting them on display. Orlando does a great job establishing Kara’s personality and setting the tone for the series. I am a big fan of his previous work and I am thrilled to see him on a high profile book. He has a really unique voice that was a bit difficult to hear in this issue, but I think it will become more apparent throughout the series. More than anything, I am really excited to follow this series moving forward.