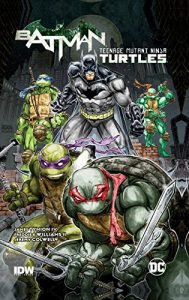 Batman/Teenage Mutant Ninja Turtles probably isn’t the first team up choice when you consider the fact that Batman likes to do things on his own, despite in fact having a team around him. This trade collects the six issues of the crossover and it read seamlessly in this format. There’s a good amount of the darkness you tend to receive with Batman stories and the witty, playful banter that comes with TMNT. You’re in for a treat if you enjoy both of these things.

Batman is as bulky as he comes in this story. Seriously. James Tynion IV does a fantastic job with writing the various characters, and there’s a lot in these six issues. You not only get a hero team up, but you also have villains teaming up.  There’s actually too many villains in here to name them all. Just know that they’ll be familiar, but the main team up  happens between Shredder and Ra’s Al Ghul. Much more probably doesn’t need to be said for you to know just how well that will go over. With so many characters to write, he really found a great balance with the light and dark here. The turtles always know how to have a good time (and involve pizza), while Batman comes with a more serious tone. Sometimes it’s hard to get those opposites to blend well, but it happens here.

Freddie Williams II is on art for the mini-series, and it exceeded my expectations. There’s a grittiness to it that perfectly matches Batman and the fact that the turtles tend to be in sewers a lot. Plus, with the mutagen villains we get towards the end, there’s a lot of insane work put into it. The coloring filled in the same type of tone for the book. Nothing was really bright or popped out too much. Overall, the book came together nicely and it may just leaving you wanting more of this team up.

Buy. This is a fun read, that manages to combine a serious situation. It’s literally life or death, yet manages to make you feel like everything will be all right. If you love the turtles and love Batman (hi, that’s me), then you’ll more than likely dig this.