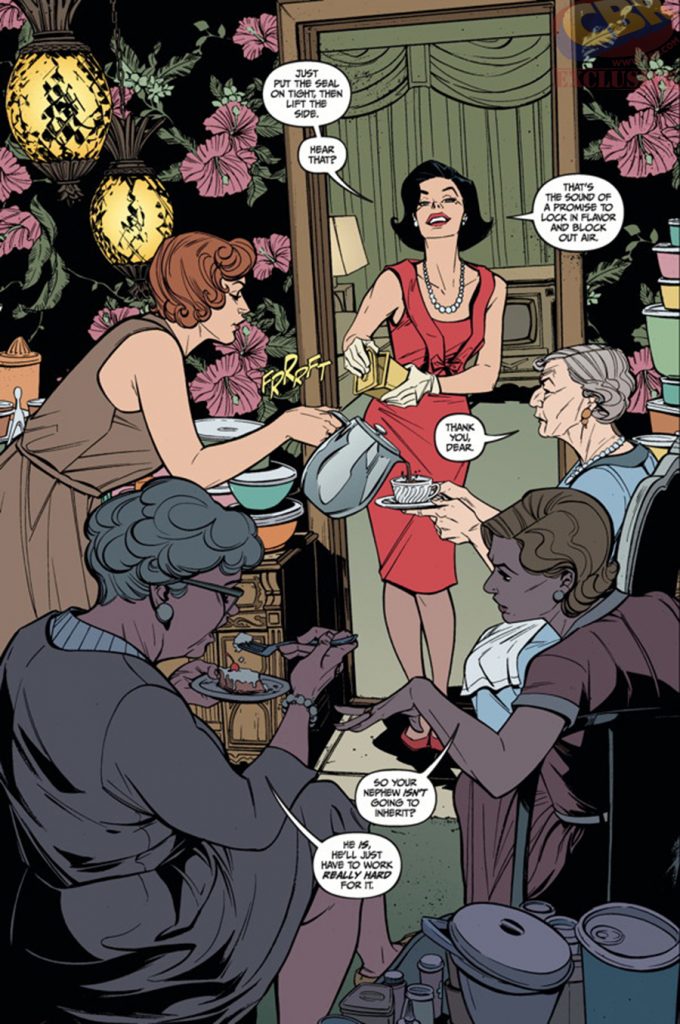 Through our end-of-the-year votes for “Best” things, not to mention our scintillating interview with Joelle Jones, you’re probably already very much well-aware of just how big a fan I was of the first Dark Horse Comics Lady Killer mini-series by Ms. Jones and Jamie Rich. The first issue of the second volume will be hitting the shelves next Wednesday, 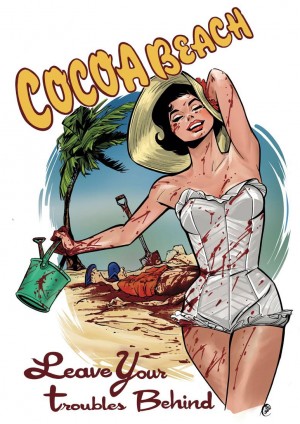 and I’ve been fortunate to get an early look at the first issue, and so as not to bury the lead (but I won’t spoil anything—pinky square!), I’ll say up-front to those of you who jumped into the shenanigans of hit-woman Josie Schuller the last time around based on my recommendations, you should do so again, as this mini-series looks to be sensational based on this superb first issue!

The setting is Cocoa Beach, Florida, and our gal Josie has…how do I put this…started her own “business”, one that also includes selling Tupperware, a product that she puts to some very creative uses, I must say! Even with the shift in locale, our supporting cast has made the trek southward, so we’re quickly re-introduced to Josie’s husband Gene, her two daughters, and of course, her mother-in-law, the ultra-nosy Mother Schuller, whose suspicions over Josie’s late-night rendezvous have not abated with the change of scenery!

Ms. Jones, who this time around has taken over the writing reins in toto, has delivered a first issue that features more of those sublime “jump cuts” that had us all mesmerized the last time, as scenes take abrupt turns from their equilibrium; it’s as if you’re riding a horse and just as you’re certain that’s she’s moving straight ahead, she takes a quick zag to the right, while (thanks to Mr. Newton!) you’re trying to play catch-up against the forces of inertia, and find yourself hanging on for dear life! There are wonderful juxtapositions of humour, horror, and biting wit, all set against the back-drop of an era where women were once again renewing the fight to have their voices heard, pushing against the “glass ceiling”, and having their place in American society respected as more than just an afterthought to the “man-of-the-house”. Josie Schuller is murdering those barriers (sorry!), and in a stylish way that at once both celebrates and satirizes the art styles of Sixties advertising and fashion magazines, always finding the perfect balance between “femme fatale” and “feminist”. Ms. Jones’ writing and art are so perfectly intertwined with the lead character, the period, and the premise that her “words and music” combine to elevate what might have been just a “high concept” piece into a singular operetta, albeit one that features the copious use of assorted cutting implements.

As someone who’s often concerned about a book “measuring up” when a favorite mini-series returns for a second bite of the apple, Lady Killer 2 shows a confident creator at the top of her game, one who delivers a first issue that I’m sure presages a mini-series that will carry the taste of a Granny Smith in the early Fall; a certain sweetness, but with a sharp tang that will have you craving more!

VERDICT: BUY it immediately!! Don’t be caught as short as I was the first time around, as Lady Killer was that rare title that picked up sales momentum as the series moved on, so that by issue #4, copies were hard to come by. Yes, there will be a trade (I bought more than a few copies of the first mini as gifts!), but this is a book that reads wonderfully month-to-month due to the stellar talents of Ms. Joelle Jones! rrr