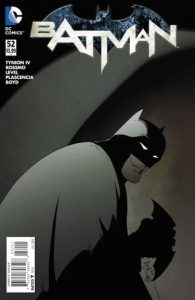 Last month saw the end of Scott Synder and Greg Capullo’s run on the New 52 version of DC’s Caped Crusader, so what then is a reader to make of the series’ actual final issue, Batman #52? Not written by Synder or drawn by Capullo, the issue exists in a peculiar limbo–caught between the end of one run and the start of another. As such, Batman #52 operates as neither an addendum to Synder nor a prelude to incoming writer Tom King’s new narrative. It operates in a timeless expanse only beholden to one thing:  the origin of the character himself. Batman #52 is its own machination, one that serves the legacy of Batman regardless of Rebirths or New 52s. As written by upcoming Detective Comics writer James Tynion IV, Batman #52 is, simply put, yet another great Batman story.

Tynion frames his narrative around the idea of needing to move on, a thematic through line that exists in the two parallel timelines that unfold throughout the issue. How these two timelines work together to tell Tynion’s story is not only magnificent but almost entirely devoid of needing to know what has come before. For even the most novice readers of Batman, this issue succeeds on the primal level of coping with an extreme loss as it pertains to the character’s well-known origin. Those that have followed the character’s most recent journey back to the cape and cowl will find another level of satisfaction at seeing Bruce’s interactions with Alfred, with whom he has been at slight odds with over the past few months. And at the same time, I have to wonder if the “moving on” motif of Batman #52 is not a message to those reeling from the tremendous loss of Synder and Capullo, offering up a positive outlook for the future of the title.

In a bizarre last-minute change from the solicits, Riley Rossmo provides interior artwork for the issue rather than the previously-announced Rafael Albuquerque. Both artists rely on similar techniques, but the Rossmo work here feels more apt for Tynion’s story. His typically harsh pencils are subdued in the moments involving Bruce Wayne but are properly accentuated when depicting Batman, and let me add that Rossmo pencils one impressive Dark Knight. Ivan Plascencia & Jordan Boyd’s colors can be a bit too muted for Rossmo’s bold art style, but the issue doesn’t suffer noticeably for it. It’s still one great looking Batman book.

Buy, but not for the reasons you would expect. Sure, this is an easy recommendation to make to anyone that has been with Batman since the New 52 relaunch and wants to finish out their collection, but actually Tynion’s close out to the title works for any reader of a multitude of levels. Although it seems like Batman #52 carries of the weight of all 51 issues before it, this could very well be an issue during any run of Batman’s rich history. Absolutely buy this if you just want a good Batman story. Period.