We left off episode 9 with Simon struggling with his transition into vampire-ism. Alec, Isabelle and Jace find out that the Lightwoods were once members of the Circle. This upsets Alec greatly and turns his loyalty towards Lydia, helping her run the Institute. In order to help her, he must bring Meliorn to the City of Bones but he’s intercepted midway by Jace and Clary. This conflict of interest turns Alec and Jace against each other. Meliorn is grateful Clary and Jace saved him; he offers to help Clary find Valentine.

The episode opens with Meliorn leading Jace and Clary into the Seelie world to find Valentine. He asks Clary about the portal shard around her neck and informs her that portals normally work to places one has been. Clary’s portal shard is from another dimension and were she to travel to this dimension and find the original portal, she will most likely find her father. At the Institute, Isabelle arrives soon after the ambush. Alec questions Isabelle’s actions during the event – the camera pans out to Degrassi Shadowhunter and Lydia discussing the appearances of both the vampires and the werewolves. Lydia arrests Isabelle for high treason, to which the Clave will decide her fate. At the Jade Wolf, Luke encounters problems with his pack. Simon enters the Jade Wolf as the new “Vampire Ambassador to the Wolves”. To the dismay of

Luke’s pack, Simon and Luke begin to discuss how to live life as a downworlder. Back to Meliorn and the lovers, he informs them that only Clary can go into the portal – he cannot let any other shadowhunters into the other dimension. He also tells Clary that she is entering a universe where shadowhunters are no longer needed, as downworlders conformed to mundane society. However, Meliorn warns that Clary might be consumed by her alternate self, so she must always find a way to ground herself back to her dimension. Clary gives Jace the cup and enters the other dimension. The world is very different – she, Valentine and Jocelyn are a happy family, Magnus Bane is a television fortune teller, Isabelle and Simon are a couple, Alec is no longer brooding and Jace and Clary are as in love as ever; everything’s perfect. She goes to see Magnus and reveals she is a shadowhunter from another dimension and needs his help. Although he believes she is from another dimension, he explains that his magic has gone dormant.

Back at the Institute, Alec offers Lydia the Mortal Cup in exchange for Isabelle’s freedom. But once he goes to get it, he sees that it was stolen from his safe. Isabelle confirms that Jace has the Cup, but that she agrees with Jace, helping Clary find her father is the best option to defeat Valentine. After Alec says he will find Jace with their parabatai bond no matter what, Isabelle warns him that could weaken them both. Alternate-world Magnus begins to create a potion to bring his magic back. When he touches the portal shard, he confirms that this portal is in this universe, at the alternate Institute. Clary is pleased with this news as she will already be at the Institute that night, for Valentine’s party. In our universe (I guess?), Meliorn and Jace are in the middle of fighting off demons come to attack them, but Alec goes to desperate measures to find his location, weakening Jace in the process. A demon enters the alternate universe. He convinces Meliorn to let him in the portal and to close it, allowing for no other demons to go in. A

lternate Jace’s body is replaced with normal Jace, who ends up being stabbed by the demon who entered the universe. Magnus leads them to the Portal where Valentine is hiding. Despite being injured, Jace and Clary walk through and back into their universe as Magnus closes the Portal. They enter his lair, with a bunch of tools in sight but no Jocelyn, or Valentine. In the cage located at the end of the room, they hear a noise. Once they open it, they see Jace’s father, Michael Wayland.

Episode 11 opens with Jace and his father hugging. Michael informs him that he has been trapped within the cage since Valentine left, taking Jocelyn along with him. As he notices Jace is getting weaker, he tells them of a portal which Valentine uses to go back and forth from Manhattan. At the Institute, Alec and Isabelle try to brainstorm and find a solution for Isabelle. Alec suggests asking Lydia for help, but this only angers Isabelle. Despite this, the Clave arrives at the Institute a little earlier than Lydia’s expectations and want to begin Isabelle’s trial right away

. At the Jade Wolf, Luke is still teaching Simon how to function in mundane life when Clary, Jace and Michael walk in. Luke is thrown off by Michael’s presence and sticks around to catch up while Clary and Simon go to the Hotel Du Mort to find human blood for Jace’s transfusion. Raphael refuses to help them, until Simon reveals he knows a little too much about the subjugates Camille’s been hiding (basically, humans who want vampires to drink their blood). Aware that Simon is blackmailing him, but frightened by the Clave anyways, Raphael reveals a secret stash of human blood. They bring it back to the Jade Wolf. There, Michael speaks to Clary about Jocelyn; he tells Clary she reminds him so much of her mother. But he also informs her about how much Valentine would have loved her as well… And naturally, Clary is weirded out by this. She goes to see if Jace is okay (he is) and after they discuss Jace and Michael’s relationship for a brief moment, they make out. Later, Luke, Michael, Clary and Jace discuss Michael’s imprisonment. He informs them that Valentine injected him with downworlder blood which began to enhance his senses, allowing him to hear about Valentine’s plans to relocate to the Renwick’s hospital (on an island close to the Institute). Jace wants to help Clary, but because he is still weak, she suggests Luke go with her instead. Michael berates his son about being weak in a later scene.

At the Institute, Alec tells his sister she needs someone to advocate for her, and she wants Magnus and thanks to a loophole, Magnus is able to be her defense lawyer. Magnus only asks for Alec’s bow and arrows in return, to which Alec agrees. At Isabelle’s trial, Magnus accuses the Clave of not actually wanting to punish Isabelle- what they really want is the cup. On the stand, Isabelle makes a speech about respecting downworlders and distancing themselves from becoming similar to Valentine. Influenced by this, when Lydia takes the stand, she makes a similar speech and wishes to recant her arrest. However, Madame Inquisitor is not having it. She states that Magnus was right, the Clave does want the Mortal Cup. If they bring the Mortal Cup to her in 24 hours, she won’t charge Isabelle as guilty. Clary and Michael return to the Jade Wolf and inform them that Renwick’s is full 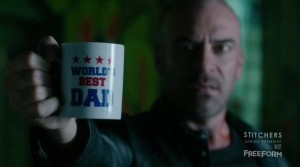 of demons, but Clary has the Mortal Cup so the demons must obey her, right? Luke, Michael and Jace run in and are faced with evil shadowhunters. Luke stays behind to fight Valentine’s henchmen; Michael and Jace go in to meet up with Clary who snuck in on her own. Clary finds her mother floating undetected in the green orb and is found by Michael and Jace… and a bunch of demons. When Clary tries to use the the Mortal Cup to control the demons, it doesn’t seem to work. Michael asks Clary to pass him the Mortal Cup to see if he could get it to work, and once it is given to him, he turns into Valentine. The Cup still doesn’t work – in fact it’s a “World’s Best Dad” mug (ironic), which Clary used to trick him. Realizing he’s been made a fool of, Valentine begins to tell the two that they are brother and sister, and that he is their father. They let him walk through the portal when neither one can bring themselves to kill him.

Verdict? An okay two episodes, although I did like the alternate universe that Clary found herself in. Generally, I enjoy Simon’s interactions with basically any of the other characters, be it Isabelle, Raphael or Luke (especially Luke). Having read the books, I was dreading the unveiling of Valentine as their father, I find the plot to be a bit disgusting in my opinion and not something I ever enjoyed. Despite all this negativity, there’s something keeping me watching! Do you feel this way? Hit me up on Twitter!