Four Doctors is a five issue event miniseries crossing over the Titan Comics Doctor Who line with the Tenth, Eleventh, and Twelfth Doctors all together for the first time. Since July of 2013, Titan has been busy developing their take on all of time and space, creating new companions for the Tenth and Eleventh Doctors as well as expanding upon the Twelfth Doctor’s adventures with current companion Clara Oswald. This comic has the challenge to live up to the promise of other multi-Doctor events such as The Three Doctors, The Five Doctors, or The Day of the Doctor. Although I feel it stumbles along the way, there are some remarkably fun moments to be had.

Starting with a flashback to the War Doctor, we see him fighting Daleks on the planet Marinus with the Voord by his side, an alien species who first met our beloved time-travelling vagabond back in Doctor Who’s first season (that’s 1963, not 2005). Allies to the Time Lords in the Time War, the Voord have become stronger because of the war: changing with each alteration to the timestream into newly evolved forms and taking hosts that serve the Voord group mind. They are, by now, strikingly different from the men in black rubber wetsuits we knew from the 60s, and seeing such an old enemy updated in a new and fresh context makes me wonder if the writhing, shapeshifting Voord would now work as well in the TV series as they do on the comic panel. While thankful for their help, this Doctor can offer them no promises that the Time Lords will allow the changes to their species to remain unchecked once the war is won.

From here we shift to the Twelfth Doctor, though our focus is on Clara, the Impossible Girl companion who leads this issue. She’s on a mission to stop her Doctor from coming into contact with his two former selves, an event she’s been told will lead to the end of the universe. In Paris, in 1923, she meets Titan original companions Gabby Gonzales and Alice Obiefune in a café, and for one glorious scene we have the three women sitting across from one another working out a plan to save the universe all on their own. Naturally, the Doctors arrive anyway and mess all that up: starting the chaos that gets the plot moving when their combined presence at the café draws out the Reapers. 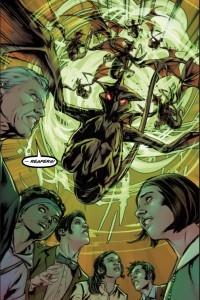 Yes, the Reapers. Remember Father’s Day? The first season episode (that’s 2005, not 1963) where Rose prevents her own father’s death, creating a paradox? Paul Cornell wrote that episode as well and he’s bringing his monsters back here in a nice callback that only slightly makes me wonder where these Reapers have been EVERY OTHER TIME there’s been a paradox on the show. The Doctors rush to get into their (combined) Tardis and shake the Reapers off through some technobabble which, true to form, naturally involves reversing the polarity of the neutron flow.

Around this point my problem with this story becomes pronounced. For a Multi-Doctor event, I really don’t see much of the conflicting interaction between Doctors which made those earlier televised team ups so great. The characterization is there while they’re on their own but falls flat when brought together. Yes, they argue, but the writing often sticks our main characters into ‘generic Doctor’ mode wherein the Time Lords simply finish each other’s sentences as we rush from plotpoint to plotpoint at a breakneck pace. The focus on the Doctor’s companions and their actions later in the story alleviates this somewhat, and, while I’m on that point, I LOVE how much the companions are given their own agency in this story, but getting such a central lynchpin wrong siphons a lot of my enjoyment out of this book. 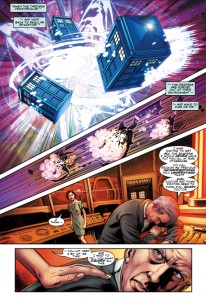 Of course, things also get very VERY Timey Wimey up in here. The “Timiest. Wimiest. Ever” as the Eleventh and Tenth Doctors put it. Due to an event midway through issue three, the Doctors each see a version of their lives where they made a wrong choice: Ten letting Wilf die in the radiation chamber, Eleven living with River in a collapsing universe, Twelve abandoning Clara when she betrays him. We get glimpses of things like the Time Lord Victorious while our heroes are stuck as “time ghosts” trying to reach a universe where they can put things to right.

It’s tough to go further into the plot without spoiling a big reveal, but the stakes are raised when it’s not just the Doctors life, but his future that gets put at jeopardy, and the climax is reached with more than a little Allons-y and Geronimo action when the Voord show up once again to turn the tables against the Time Lords.

The art style for Titan’s Doctor Who comics aims for likenesses and realistic representations of proportion within the characters. This is always difficult to accomplish well, and it shows more on characters we know and love from the series than with the original characters designed specifically for the medium. There are a few panels of this comic where I thought characters notably resembled their actors, but consistency occasionally falters panel to panel. This really isn’t a fault of the artist: the backgrounds are colourful and gorgeous and, while a more exaggerated or stylized approach would have eased this pressure, this is a stylistic choice across this range.

Verdict
Multi-Doctor events occur rarely in the television series, and with good reason. Keeping each Doctor unique while they all work on the same problem is a difficult task, and often individual Doctors will blur together for the sake of moving things along. While I admire the focus on the companion’s actions and the callbacks into the show’s history, the story, to me, didn’t support the lack of focus on the central character. On a crossover particularly, that should be the theme, not an afterthought.

Still, if all you’re looking for is a quick read that’ll satiate your Whovian lust for multiple Tardises, or if you’re interested in getting a sampling of what Titan has on offer in the Doctor Who department, it wouldn’t hurt to check this one out. It’s nowhere near the mess of Dimensions in Time.