Pumpkin spiced lattes. Crisp October mornings. The smell of Halloween in the air. The daunting task of navigating through the Fall Anime simulcasts.

Ok, maybe that last one is a little less universal. But I’m willing to bet I’m not the only one who gets pumped with the changing of the seasons throughout the year. The Fall Anime lineup brings a whole new set of obsessions…and a few duds. While I have not watched every new anime this season, I have a few series I’d like to bring up to show the variety of anime this season. First episode spoilers to follow! 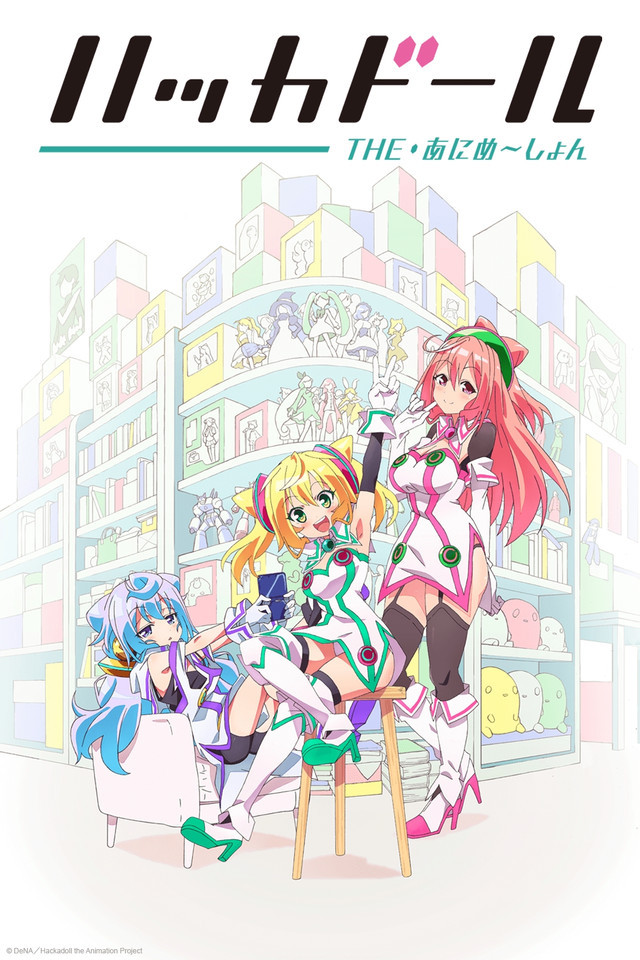 Three Hackadolls (personal AI units) are subpar. They are required to go to earth and advance humanity. They end up assigned to an otaku woman. They are fascinated with her, and want to do the best job they can. They analyze her life based on the items in her room and make personal recommendations – which end up being sailor scout costumes, boys’ love, and a bit of erotica. They do their best to encourage her to go to Comiket, a convention. The otaku woman is understandably frustrated. The show has a lot of bouncy boobs going on. It definitely has a spazzy feeling to it. 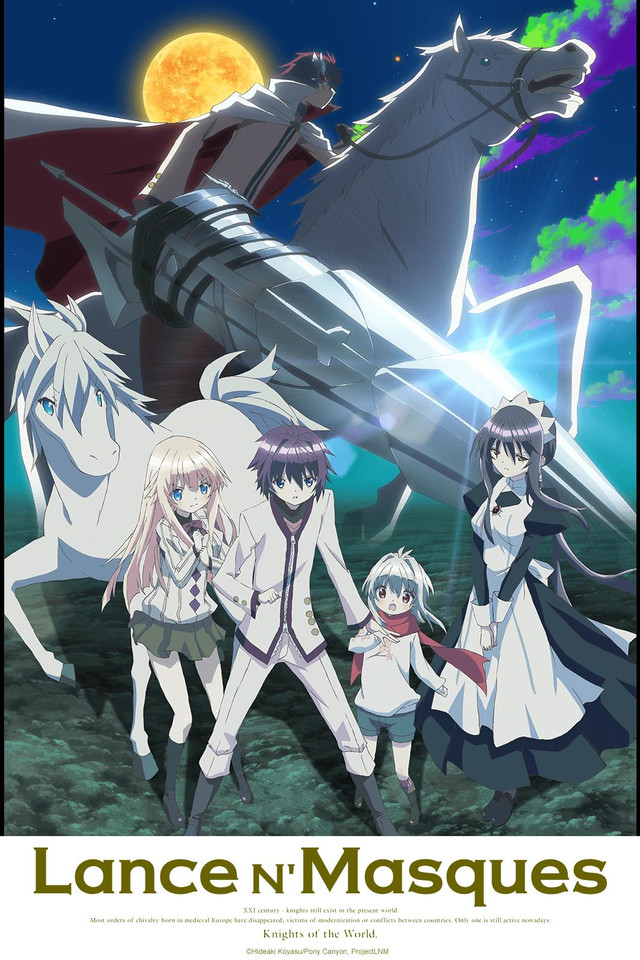 Yotaro is a Knight of the World in modern-day. Makio is a little girl, daughter of an important family. He rescues her, but she doesn’t recognize him without his mask. She invites Yotaro to come to her mansion and stay temporarily. His companions are looking for him. Makio is in danger from some kidnappers, and Yotaro steps up and saves her life again. There’s not a whole lot to this series. Yotaro is the son of a famous knight, living in his father’s shadows. Makio is ignored by her parents. The two are more or less orphans. This could be a good series…if Makio wasn’t such a child. Literally a child. And some romantic (?) tension exists between Makio and Yotaro. I was hoping initially that their first meeting was a flashback and they’d meet again as older teens. This is not the case. There is some borderline sexual tension, especially when Makio gets in bed with Yotaro. But, on a more positive note, the music that plays when Yotaro is getting all knight-like reminds me of Tuxedo Mask. 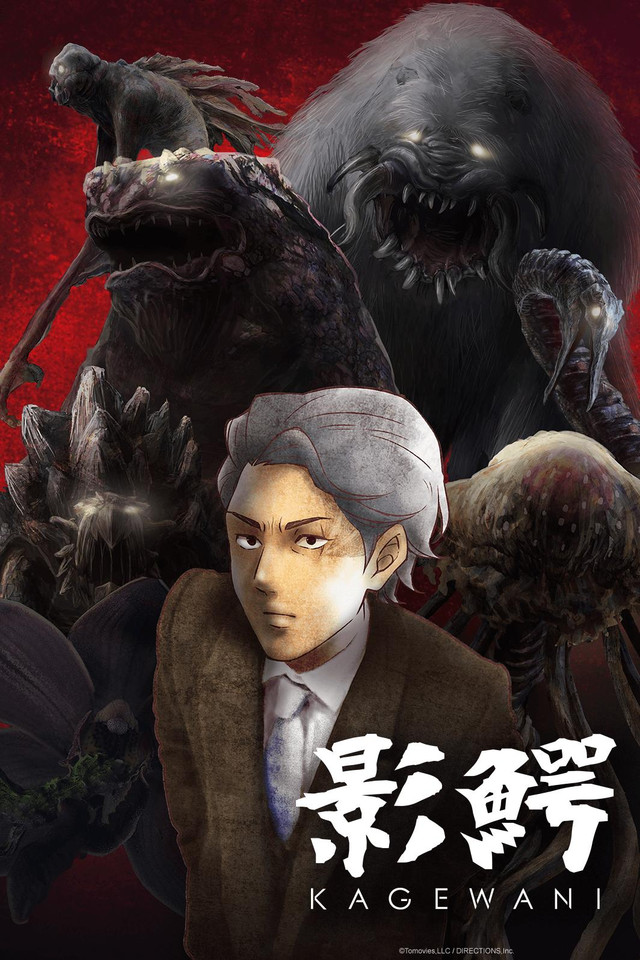 Short-form anime about a lecturer. Or a YouTuber. Or monsters. This introductory episode was great for building suspense. Ambiguous protagonist at first leads you to believe that anyone can die at any time. And people totally do. In a forest, a YouTuber is trying to make a false video of a monster on a lake. Little does he know what lies in the forest. If you like kaiju, you need to watch this series. It is worth watching just for the unique animation. 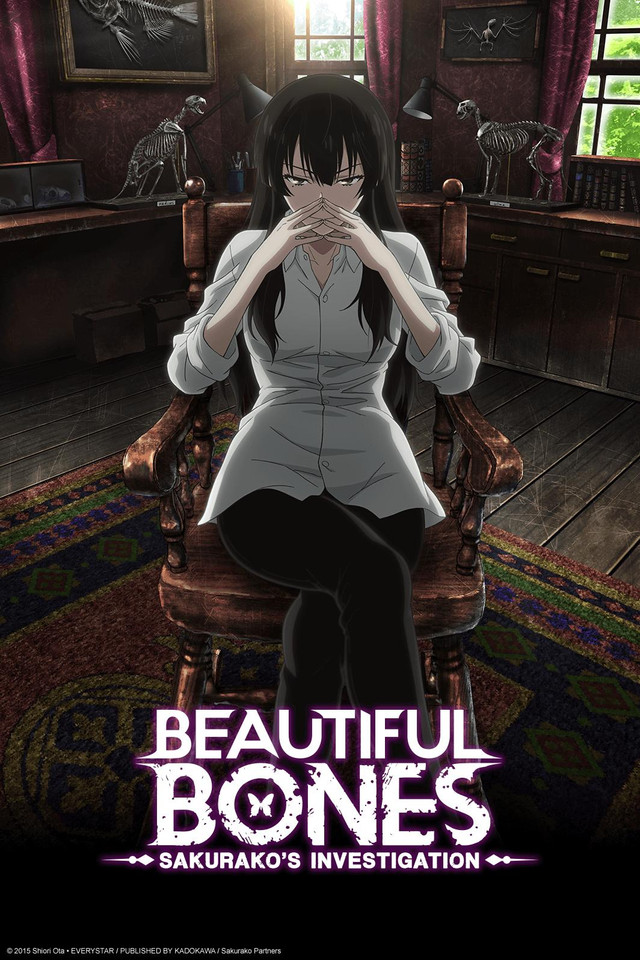 Episode 1: The Princess Who Loves Bones

Show opens with a high school boy reflecting on the stagnation of his hometown. Tatewaki Shoutaro comments that “real death gives up pause”, and we see the care he exhibits when he finds a dead cat near school. He is an acquaintance of a woman, Sakurako Kujou, who is an osteologist. She is obsessed with bones, and her life revolves around finding bones or restoring skeletons. She and Tatewaki make a trip to the beach to find interesting bones. While there, they come across a skull with a puncture wound in the forehead. While Sakurako quickly identifies the gender and age of the skull, Tatewaki calls the police. The policeman who arrives seems skeptical of Sakurako’s description of the skull, but he warms up to her perspective when she points out that the skull is over 100 years. One the way to the station to file a report, they encounter another group of officers dealing with a double suicide. In a quick “magical girl” transformation, Sakurako inspects the dead bodies and proclaims they have been murdered. As an outsider, her cause is rejected. Only after the mention of her forensics professor uncle is she validated. At the station, the policeman asks her to explain how she knew it was a homicide. Sakurako runs through several key points that would indicate a suicide, ending with the comment that she looks for murder when she sees bones. 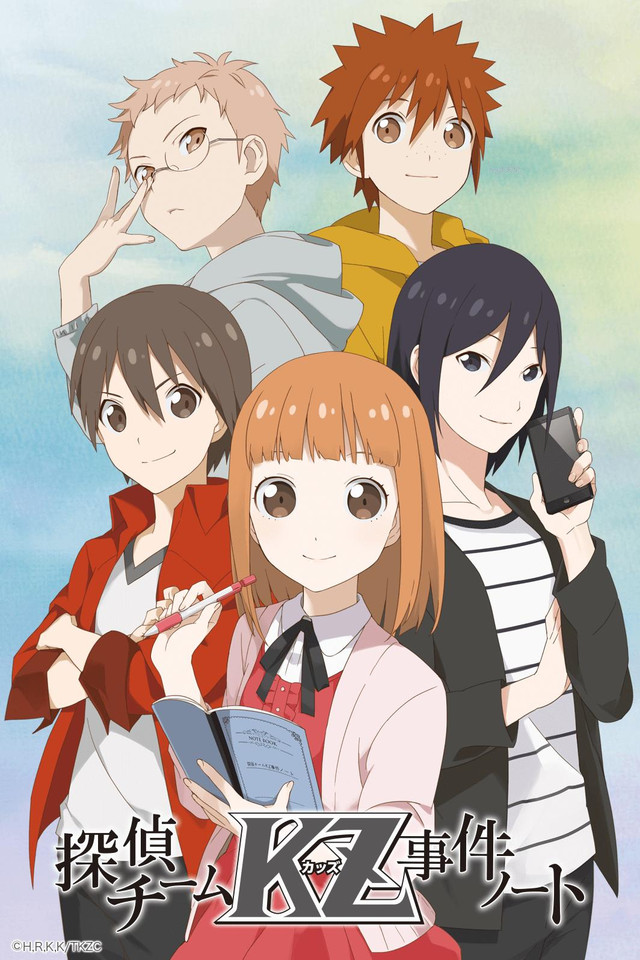 Tachibana Aya is a student who blends into the background at her school. One day, while the much-beloved soccer team is walking into school, one of the members runs into her with his bike. He is rude, and one of the other boys hits on Tachibana. She is embarrassed by the attention, but becomes upset when she thinks about her lack of friends at school and at cram school. Later, her teacher pulls her aside to discuss her grades. Tachibana may have superb language scores, but she greatly suffers in math. In order to get her grades to be less all-over-the-place, Tachibana is put into a special class. This class is composed of four of the soccer players, including the ones she ran into earlier that day. The following day at school, one of the boys grabs her at the end of class to help him write a note about his missing bike. This the birth of the detective club they form. 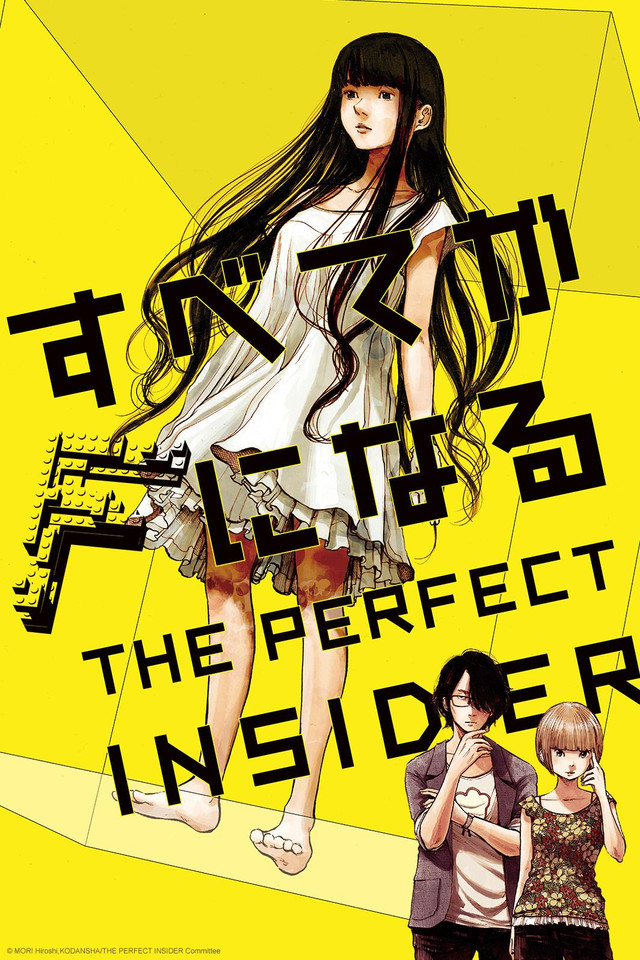 Wow. Moving this one to the top of the list this season. Saikawa is a brilliant academic in a slump. His former mentor’s daughter, Nishinosono, works hard to bring him to life and keep him stable. She has had contact with a brilliant programmer by the name of Dr. Magata Shiki. Magata is shrouded in mystery. Rumor has it that she killed her parents, but she claims it was the work of a doll. She was declared mentally unstable and released, though she spent years working in isolation. Nishinosono suggests that Saikawa and his small team take a vacation where Magata is living. Nishinosono seems fascinated by Magata, but not as much as Saikawa. There is an eerie feeling to Magata and her story, especially since she became thrown off by Nishinosono’s question during a video conference, “Who are you?”. This anime has a beautiful opening sequence, and CELLO MUSIC during the show. The animation is perfect.

Kukuru and Somera are sisters. They have magical powers and can turn into robots? I’m not exactly sure what’s going on here. Regardless, this looks like a funny, fast-paced cartoon that may not make sense. It’s about 3 minutes long. 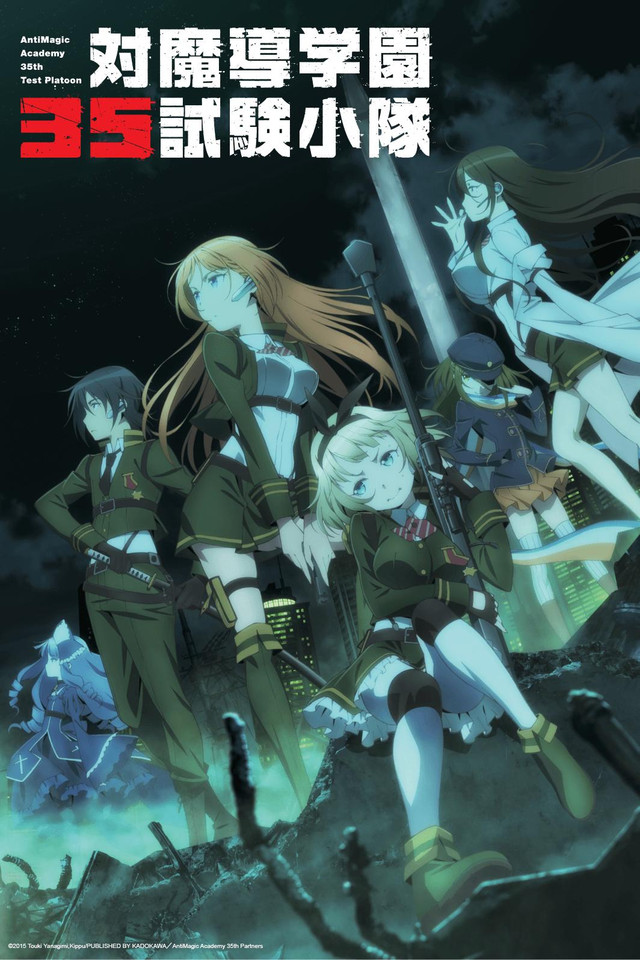 Kusanagi is a student at the Anti-Magic Academy. He leads the 35th Platoon, commonly known as the Small Fry Platoon. It is made up of Ikaruga, a super cool mature older sister stereotype, and Usagi, a younger sister hyper-sexualized stereotype. The 35th Platoon isn’t really known for its accomplishments. In fact, they are kind of the loser platoon. Kusanagi carries a sword, a relic that others see as a hindrance in a fight. The Anti-Magic Academy hunts down witches and magical artifacts. Not much has been said yet about why it’s so important to confiscate these weapons, but there is an implied danger to them. Ohtori Ouka joins the platoon as a punishment. She sticks out like a sore thumb; while the platoon seems to be a bunch of well-intentioned students with little foresight, Ohtori is a focused, talented Inquisitor. She hunts magical artifacts efficiently, and the antics of the team drive her up the wall. This series is off to a shaky start despite a beautiful, cinematic opening. I just wish there was less…bouncy boob shots. 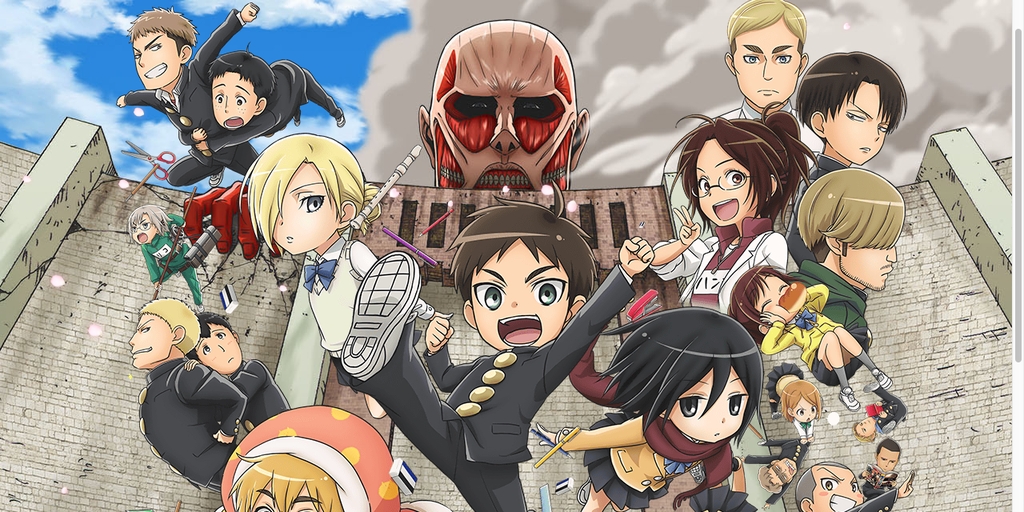 This is not the show for you if you haven’t seen Attack on Titan. The spin-offs of the manga explored different stories, including one in an alternate universe where the main characters are junior high students. And Titans eat their lunches. It’s a super cute, fast-paced show that parallels the original series. There’s the opening moments with the birds, the Colossal Titan peering over the edge of the wall, Mikasa waking Eren up from a nap, Jean’s crush on Mikasa, Ymir’s obsession with Christa, Sasha’s obsession with food…everything is pretty much on the money as far as connections to the original. What’s different is the tone. Everything is so much lighter, looser. There’s a lot of physical comedy, like school supplies falling on Eren’s head and the constant encounters with classmates. The one thing that’s a little weird is the hinted-at crush Mikasa has on Eren. That better not play out.

There are several on my list that I haven’t checked out yet (Heavy Object, Comet Lucifer, Hakone-chan, JK-MESHI!, Komori-san Can’t Decline, Starmyu, Dance with Devils, Utawarerumono The False Faces, OWARIMONOGATARI, The Asterisk War, Young Black Jack…), but I have some definite don’t-miss shows. Beautiful Bones -Sakurako’s Investigation- was one I looked forward to this season, and Perfect Insider blew me away. Interestingly, both of these are mystery/crime shows. Attack on Titan Junior High was a treat, and now I want to go back and watch the original series. And Hackadoll was a fun show, and I’m hoping they portray geeky women positively.

For more anime tidbits and reviews, check out Talking Shojo, hosted by me and Maria Norris. We definitely want to hear what Fall 2015 anime you’re watching this season. Hit us up at @talkingshojo or on the Talking Comics forums. Happy watching!