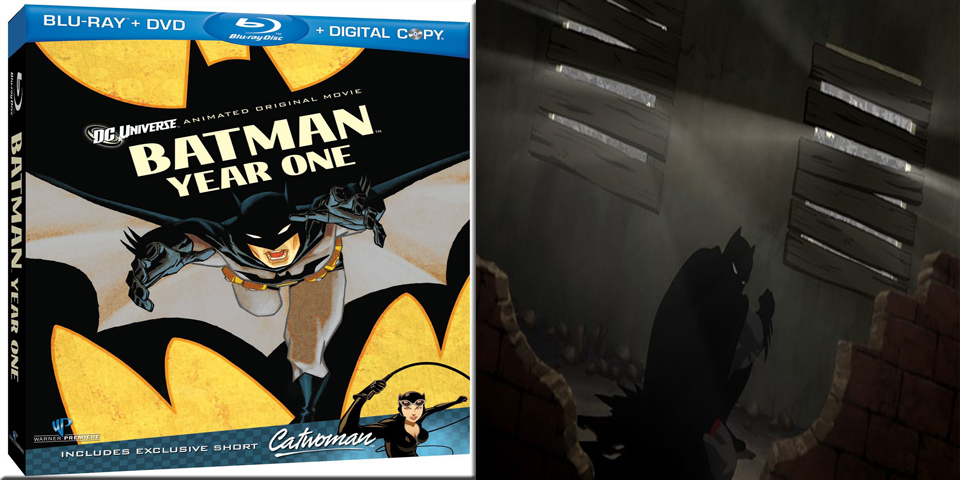 Spoiler Alert! We will be discussing intricate aspects of the film here. If you have yet to see Batman: Year One or have not read the Graphic Novel, perhaps you should check back after having done so. Fair warning.

The time has come for every Batman fan to rejoice in the adapting of one of the most highly celebrated Batman stories into a slick animated film. Written by Frank Miller with art by David Mazzucchelli, Batman: Year One tells the story of  Bruce Wayne’s return to Gotham City, after being abroad for extensive training in hoped of becoming Gotham City’s most feared vigilante. Alongside this tale of hard knocks and lessons learned is the story of how Jim Gordon comes to meet and, in time, trust the Batman. Exploring both a triumphant return to Gotham from the perspective of Bruce Wayne, and a harsh view of the city from Jim Gordon’s fresh and suspicious eyes, Batman: Year One is one of the best page for page adaptions from book to film I’ve ever seen.

For me, Batman: Year One got off to a bit of a rocky start. Ben McKenzie, in my humble opinion, just does not have a strong enough voice to be either Bruce Wayne or Batman. His opening narrative felt more like a line reading rehearsal than something that should have made the final cut for the film. McKenzie’s cool and soft voice just isn’t the way I’m used to (or enjoy) hearing my favorite comic book character speak when animated for the screen. On the other hand, we have the talent of Breaking Bad’s Bryan Cranston lending his voice to the character of Jim Gordon. Cranston has a powerful voice that truly resonates with that of Jim Gordon’s personality and experience. Considering the fact that the majority of this film is from the perspective of Gordon, it’s only fitting that he be given such a powerful voice.

So how was the film itself? Freakin awesome! Having just read the graphic novel for the first time days before seeing the film, I was primed and ready to see just how well the two stack up against one another. I’m happy to report for those that have read the book, that Batman: Year One is lifted right out of the pages of your cherished novel, with very little missing from its awesomeness.

Sam Liu and Lauren Montgomery clearly had it in mind to stick as faithfully to the source material as they could when making this film. All of the characters, danger, seduction, and nuances are all there and were handled with care. This is clearly a film for those who love Batman and never tire of hearing yet another version of how Bruce Wayne starts off as The Dark Knight. Though the art style doesn’t particularly match that of the art contained within the book: the sleek line work, vibrant coloring, and rendered shots all fit the tone and work quite well for this particular story.

I’ve heard rumblings in the past few days of people not approving of this film because they feel that it is more centered around Jim Gordon than it is the story of Batman’s first year. To them I say that you probably should have probably done your research, but also that Jim Gordon is just as important to the rise of Batman as the event when that first bat that inspired Bruce to chose his weapon of fear. Sit back, relax, and enjoy an look at Gotham before the Joker was poisoning the water supply and villains were injecting themselves with Venom.

Overall, this is a wonderful film and a fine representation of Batman story that with time has grown to become a fan favorite.