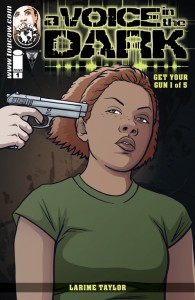 Words and Art by Larime Taylor

A Voice in the Dark: Get Your Gun begins in a way that any good action blockbuster should: with a guy getting pistol-whipped. Unfortunately, that is the first and only bit of movement we see throughout the entire issue. What follows is a convoluted “then and now” storyline that is filled with undated journal entries that seem to exist outside of continuity. Not to mention, it is very difficult to understand which parts are relevant to the overall narrative. Though one could easily assume all is pertinent, it is not made clear.

A “Bullet Points” list at the beginning gives you a rundown of what has happened in past arcs of A Voice in the Dark and somewhat sets the scene, but regrettably, it is not enough to cover the basis of character nuance and understanding for new readers as this new number one is supposedly created to be accessible to.

Zoey, our protagonist or antagonist—who even knows what she is to be considered—is a natural born killer and has killed recently. After sifting through dialogue and monologue diary entries, we find that another killer is on the prowl and they know about Zoey.

Just as watching Dexter has a tinge of creepiness to it as you follow a murderer and even possibly root for them, so does A Voice in the Dark. There is talk of blood and there is even a date that should be a date to remember, but alas, even the date of blood spillers suffers from what is the heart of this story’s problems.

Much of the issue is full of conversations, which are not altogether bad, but coupled with the emotionless art, it makes for a cumbersome read as you try to plod your way through inexpressive and flat characters not doing much of anything. The art, though pretty, is very emotionless, wooden and cold. The art is excellent, but it is frozen. It lacks conviction. There are at least two or three panels where another emotion besides existence can be seen and they are stellar. Outside of that, it is posy and lifeless. Also, in regards to coloring, there is an odd texture throughout the images that is interesting but most often feels like a photoshopped texture to cover up empty art.

There is gold underneath this in that the premise seems interesting and some of the conversations are extremely creepy in both content and context. It is just unfortunate that this book has such promise but fails to deliver in presentation and movement—both in plot and in character models.

Let it pass you by and maybe give the trade a try if you feel so inclined. It’s a six issue mini-series, so it shouldn’t take long. The slow moving pace and confusing plot is a turn off, but that may change in future issues. The creep factor is tangible, if only in being what it is and not in how it’s presented.

This book contains imagery and content that may not be suitable to young readers.