So what did we learn from New Avengers this week?  One, partnering up with a sadistic world murdering cabal can lean on the conscience of even the most arrogant of people. Two, Doom is no man’s second choice and he always has a plan.  You tell them Victor!  In all seriousness though, this was about as depressing a comic I’ve read in a good long while. 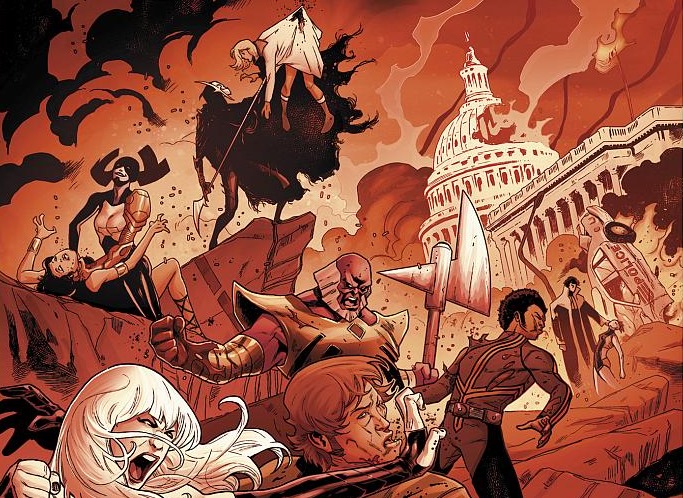 As with Avengers proper this book jumps us forward 8 months into the future.  The incursions are happening everywhere and Namor has begun to see what he’s done.  Reading and seeing that was a revelation.  Seeing Namor, one of the most headstrong arrogant characters I’ve ever read, asking for help was something to see.   After reading the entire issues I could see why he would feel that way.  The cabal that he’s assembled doesn’t just destroy worlds to save this one,  they revel in doing it.  They kill and torture those they already doomed and man was it uncomfortable to watch.  The scene of an alternate version of one of Marvel’s best, broken and being forced to beg actually saddened me. I could feel the despair there.  Hickman does a really good job here of making these villains more opposing and threatening then I’ve ever seen them before, and that’s due to the the writing of the issue.  The dialogue really stood out to me.  It’s sharp, to the poin,t and it demands your attention. There are intense interactions between characters in this book, I read it again immediately after finishing it and enjoyed it even more the second time around.  Also to be noted was the art. The pencil work here adds to the terrifying nature of what’s happening. Valerio Schiti draws the cabal in a way that matches Hickmans dark and depressing script.

Buy it.  New Avengers is up there with books like Daredevil, Batman, Saga and many others in the way that each issue is consistently so good that you end up taking the series for granted.  The slow burn that Hickman is known for has ended, and the story is in full swing now.  Marvel keeps pointing us towards the future when “time runs out” and whether that will turn out to be a world changing event or not is yet to be seen. What I do know is that I’m completely on board to find out.  New Avengers is depressingly excellent this week.  Read it.