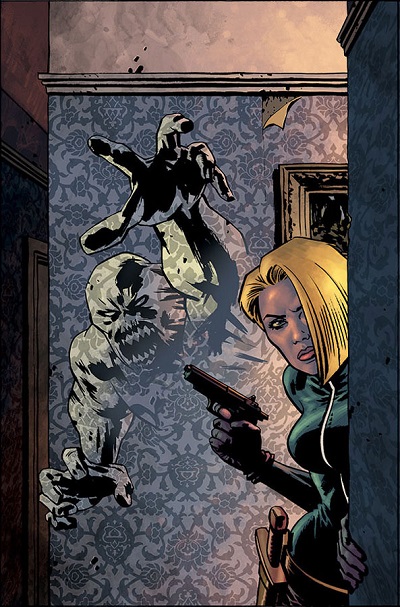 Sometimes a comic’s tone and feel is so distinctive that you can actually hear a soundtrack to it in your head as you’re reading it.  In Ghosted’s case it would definitely be “Green Onions” by Booker T. and the MG’s mixed with a Halloween Spooky Noises cassette tape.  That probably sounds silly but it’s true and the so it goes for the series as a whole.  What sounded like a bit of a stretch at first (Oceans 11 meets Ghostbusters) is gelling together wonderfully, blending elements of both horror and heist genres into an addictive and fun hybrid.

Picking up from its debut last month, we find Jackson T. Winters and his “ragtag” team of investigators entering the notorious Trask Mansion for the first time.  After a quick history lesson regarding the grounds and its dark and bloody history, the group sets to work finding the ghost they’ve been sent there to steal.  As believers and doubters begin to butt heads, one thing becomes clear: they are not alone in the house.

Goran Sudzuka’s art was certainly a highlight in its first outing last month and remains so in issue #2.  The pages have a classic pulp feel, harkening back to the art found in EC Comics’ horror books, but also maintain a firm sense of the modern world.   Miroslav Mrva’s colors complement this aesthetic perfectly, giving the scenes a great dark and moody atmosphere.

In terms of writing, Joshua Williamson continues to perfectly walk the tricky tightrope of paying homage to the two genre’s conventions without sounding too heavy-handed or stereotypical.  The dialogue is brisk and clever, and Ghosted never feels like it’s in danger of losing its sense of humor.  It’ll be interesting to see what Williamson has in store for us next issue now that some of the more supernatural elements are beginning to enter the story.

Buy this book.  If you are a fan of either one of the genres that have been smashed together in this series, you’ll love Ghosted.  It’s fun, unique, beautiful to look at, and promises some good old-fashioned scares on the horizon.