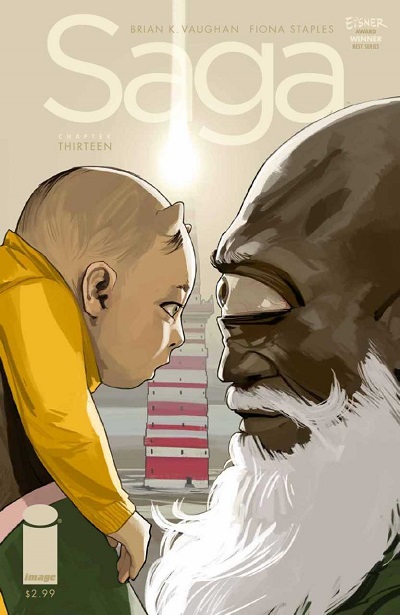 After what felt like an excruciatingly long hiatus (but then again, the usual month without this book is just as unbearable) Saga has returned.  And you know that tiny little voice that was in the back of your head?  The one that questioned whether it would return just as strong as it was?  Well, tell that voice to cram it and take a hike, because there’s not much here to worry about.

Issue #13 is a bit of a prelude to the previous installment, as we find Alana, Marko and company arriving on the planet of Quietus in search of the elusive D. Oswald Heist.  While her reluctant mother-in-law Klara believes this to be a waste of their time, Alana still holds onto the hope that the author will somehow be able to help her and her young family.

Brian K. Vaughan appears to slow down the pace of the plot a little in this issue, giving us a look at how each group of characters are dealing with the emotional traumas they’ve had to endure so far in the series.  This strategy is a bit of a double edged sword.  While it does treat us to some captivating moments it also makes the story lag a little, though the monster battle he throws in near the end certainly spices things up.  Pacing aside, however, it’s a pretty solid outing.

As we’ve come to expect, Fiona Staples’ art is gorgeous.  It’s unbelievable the amount of emotion she’s able to communicate to us in a single panel, with Marko’s haggard and stubble-covered face serving as a prime example in this issue.  In a single frame, in just the eyes alone, we can see the cumulative stress of months of being on the run and the recent tragedy he has suffered.  Also, can we take a moment to talk about that scary-ass skeleton monster thing?  Holy moly, people.  Holy freaking moly.

Buy It – If you even remotely enjoy comics you need to be reading this book.  While it may not be a complete return to form, Brian K. Vaughan and Fiona Staples continue to craft a series that not only entertains but permeates the lives of those who read it, making the characters feel like parts of your family rather than just lines on a page.  Saga, in its seemingly effortless way, manages to be on a completely other level than most comics being published today.