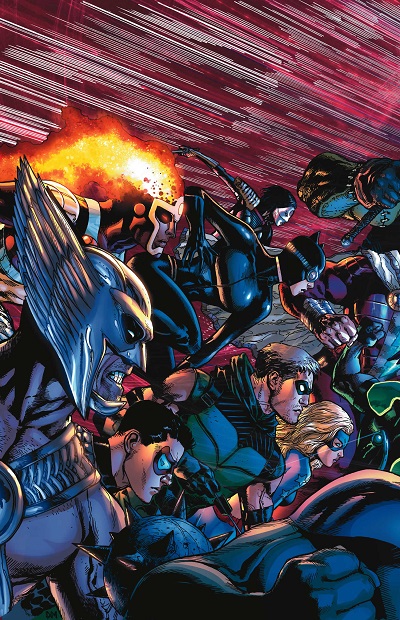 Momentum is king when it comes to any ambitious crossover arc.  That constant push forward as the stakes are raised, our protagonists finding themselves pulled ever deeper into their trials, can really be the most important driving factor for most readers to invest into these longer form stories.  But, while Trinity War has maintained a constant presence on that oh-so-important accelerator throughout its tale, Justice League of America #7 may have also proven how important the steering wheel can be as well.

Following off the heels of The Phantom Stranger #11, the villains of the DCU, both Society members and freelance alike, have decided to make their own moves in response to the chaos that is surrounding the Superman fiasco.  As one team of heroes confronts Doctor Psycho for the information he may hold, another finds themselves expelled from heaven minus an important member of their team.  Finally, Pandora, after failing to find a mortal capable of opening her mystic Box, seeks the assistance of Lex Luthor to further her own agendas.  Will the noted villain be able to save the world from ‘Sin’ before Wonder Woman and her team can stop them?  And have the Secret Society finally found a way to rid themselves of the entire JLA?

As I stated above, this event continues at a breakneck pace in this fourth chapter, moving its pieces frantically to and fro around the game board.  Unfortunately though, as the investigations of multiple teams hit dead ends at every turn, the mystery starts to lose a bit of its luster in the chaos it is surrounding itself with.  Missing only the ‘Yakkity Sax’ background music, our heroes begin to look more like scurrying fools, dancing to the whim of their mysterious antagonists without any real revelations given just yet (a tone that I am certain was being aimed for, but is beginning to become a smidge overbearing at this point).  I’m all for building a mystery, but as we get this late into the story’s run, this issue does instill a little fear that it is running out of real estate to properly address the many items it still has hanging over its head with the impact necessary.

That concern of the crossover as a whole out of the way, this particular chapter salvages a lot of that anxiety through the interactions of the characters contained within.  Even as the plot is careening wildly, the conversations of our heroes and villains are solidly presented and entertaining in and of themselves, making the chapter itself worthwhile.  With minimal action contained within, it is what this issue of Justice League of America was hinging on, and it is always nice to see that particular avenue so strongly done.  The playful moments are fun, the inherent conflict of ideals amongst team members is interesting and engaging, and the addition of iconic villains to the arc is handled splendidly.  So while I have my anxiety on the plot at the moment, a big kudos to both Johns and Lemire for their work in this arena.

The art from Mahnke was close to what I have come to expect from him.  Not quite as consistent throughout as I would have liked, but with a veritable army of inkers on board as well, it actually turned out better than I would have expected looking at the credits.  With the exception of one oddly-proportioned splash page, it managed to capture the same big budget summer blockbuster fare that the arc has been surrounding itself with, without short-selling the smaller character moments.  A tough feat for certain, but one that Mahnke has always made look so easy.  Adding to the difficulty, the issue was mostly conversational in nature, but the tone was still captured through a deft usage of background moments to help break up the easy trap of talking heads.

In for a penny, in for a pound.  With the mystery continuing to build this late, I have my concerns, but I cannot fully commit to them without knowing how the final two chapters will play out.  If you’ve been following along with the first three (and I would highly recommend The Phantom Stranger #11 as well for more info on this issue’s shenanigans if you passed over it), stick with it.  It’s not the strongest chapter of the crossover to date, but it does hopefully start the chain of events that will lead it into a worthwhile payoff.