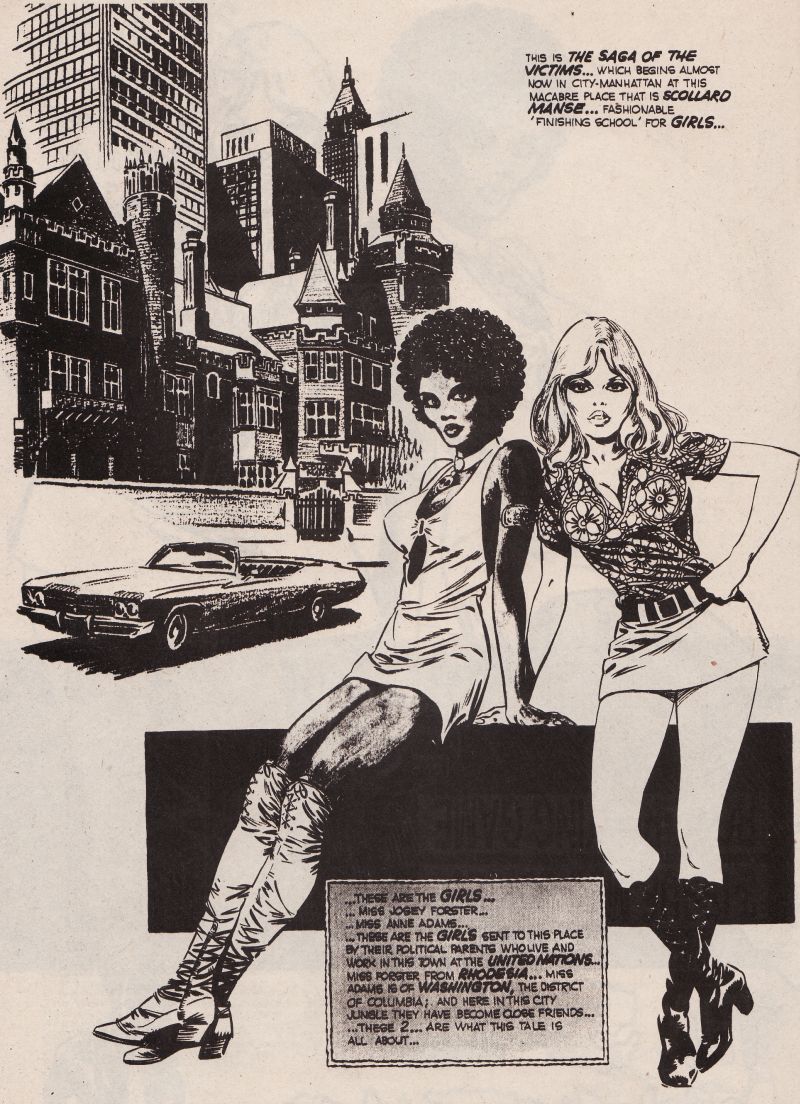 A retro-review by Bob Reyer

Hello, all you habitues of the horrible, it’s time for your favorite grave-robber,  Cranky Old Uncle Bob, to dig up another forgotten relic from the comics church-yard, in this case a serialized story that lay unfinished in the metaphoric dirt for over thirty years until being completed for a reprinted edition! Intrigued…anyone…well, despite that tepid response, I intend to carry on anyway!

How can I refuse a request from a lady, especially as it was just your birthday. Off you get, and away we go, back to the matter at hand…

…and back to the 1970s! With Warren’s Creepy, Eerie, and Vampirella magazines driving readers batty, publishing schlockmeister Israel Waldman enlisted former Marvel production man Sol Brodsky and together they created Skywald Publications (See how they got that name– clever, right?) to bring three new black & white horror mags to news-stands in 1970: Nightmare, Psycho and Scream. Mr. Brodsky would leave almost before he showed up, probably assuming that things were much safer as Stan Lee’s right-hand man. His associate editor, Alan Hewetson, took over the reins and crafted a more literary, singularly nihilistic style that he called the “Horror-Mood”. Using adaptations of Poe and Lovecraft as a foundation, he published them alongside new works by some of comics’ most respected writers and artists before Skywald shuttered their doors after five short, but gruesomely memorable years. The most fondly remembered piece was of “Archaic Al’s” own creation, the long-form serialized Saga of the Victims, which featured the haunting and detailed art of “Suso”, who was more properly known as Jesus Suso Pena Rego.

Beginning in Scream #6 (6/74) and continuing through #11 (with issue #10 off for good behavior!) readers would thrill to the exploits of two remarkable young women, Josey Forster and Ann Adams. The girls had been sent to New York City’s exclusive Scollard Manse Finishing School by their parents, Josey from Rhodesia and Ann from Washington, DC, but how could anyone have known that their destination would be a Hell on Earth!

Returning from a double date, the room-mates are abducted by bizarre creatures who drag them to hideous catacombs under the school itself where a strange magistrate orders them tortured to death for trespassing! Josey’s anguished pleas that they were kidnapped fall on deaf ears, and the young women are taken off to await their dire fate. 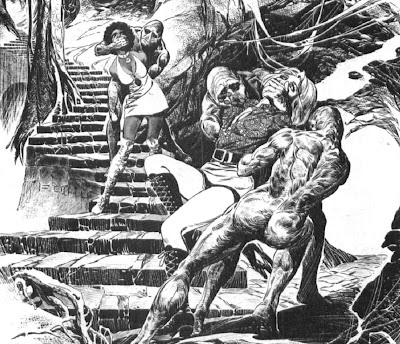 Standard stuff, you say… just more of the usual D.I.D.? Well, you young rapscallion, Josey and Ann are not your typical Damsels in Distress. They gather their wits about them and use their intelligence to bravely fight back and effect a hair-raising escape… 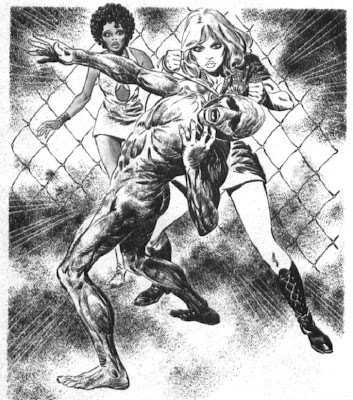 …only to find a New York City over-run with the very monsters that abducted them! The girls are quickly recaptured, and brought to the offices of an odd man who informs them that they are not prisoners, but part of a test of character, and that they must give in to their fear in order to survive. Thumbing their noses at this, and with attitude a-plenty, the girls take off, but come upon…

(Let your readers discover the rest for themselves, Robert!)

You’re right, Audrey, but let me say that over the five issues of Scream, Josey and Ann would encounter vampires, Nazi zombies and all manner of peril, but were never truly “victimized”, as they wouldn’t surrender to their fear, and always found a way to survive. Sadly, Skywald wouldn’t, and shut down the presses in 1975, and the concluding chapter of the Saga of the Victims would remain unseen by the public for nearly 30 years. In 2003,  a small British publisher called Headpress decided to reprint these stories, and have Alan Hewetson and Suso Rego re-create the final chapter for the trade paperback collection. 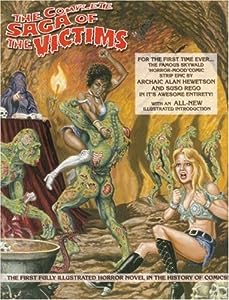 Even after so many years,  a sense of oppressive doom pervades the story, and Suso’s art, if not quite as detailed as it once was, is still able to convey the overwhelming dread that Josey and Ann are feeling, and their determination to find a way past it. Perhaps more importantly, the dream-like atmosphere that had been present in the originals was still there; the feeling you have when you wake from a nightmare, only to find yourself again trapped in its clutches a moment later as you realize that you haven’t really woken up!

I vividly recall buying and enjoying the first two chapters of this wild tale back in 1974, so when I was researching an essay on horror titles for Talking Comics, I came across this reprinted collection, and had to take a chance that this was as scary as I remembered it being. Amazingly, unlike so many other things that don’t stand up to our  adult sensibilities, The Saga of the Victims actually improved with age. (Mine, and the book’s!) My appreciation for the craft involved in creating this work is much deeper, having read so much more along these lines in the intervening years,  and it’s still darned creepy!

(You shouldn’t swear, Robert, darling. there might be children present!)

My apologies, but shouldn’t you kids be in bed by now?

Summing up, an audience now used to the cinematic stylings of Quentin Tarantino and  Robert Rodriguez (and what a movie “…Victims” would make; picture Death Proof crossed with Cabin in the Woods!) will appreciate the “exploitation movie” vibe of  The Saga of the Victims, and even more the toughness inherent in Josey Forster and Ann Adams behind their beautiful exteriors. 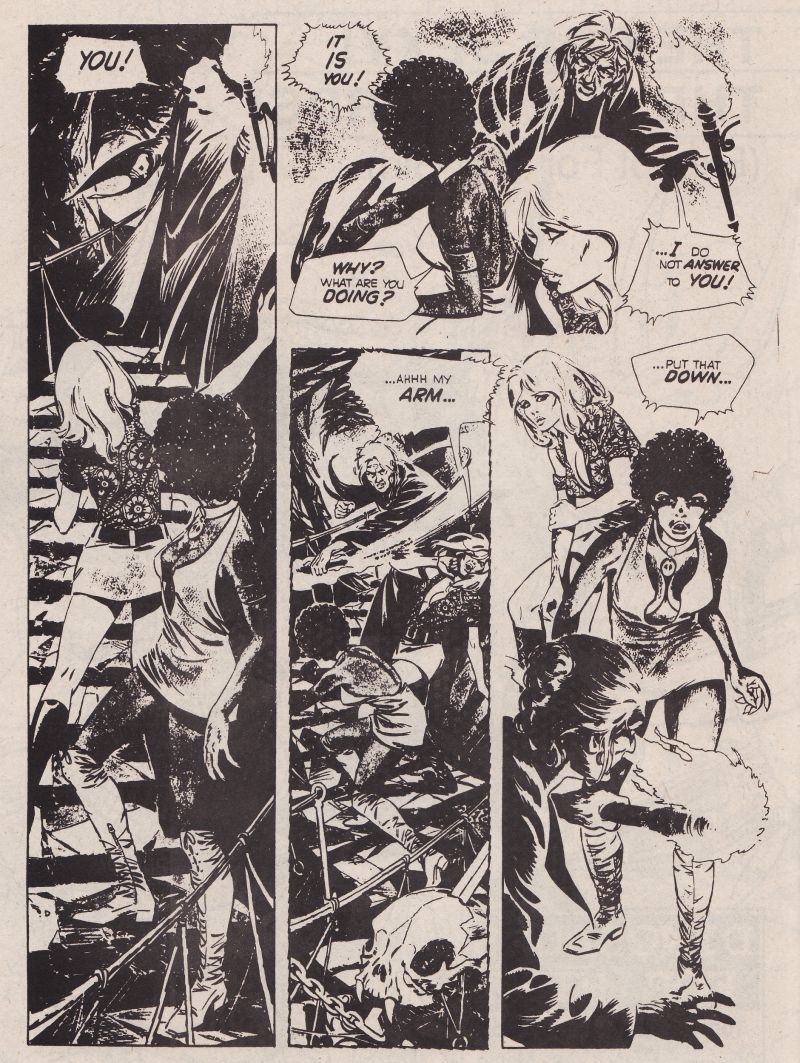 Well kiddies, that’s about it from this end of the graveyard; the rats in the walls say it’s time to go; don’t let the mausoleum doors close on you before you get out. Audrey and I will see you down the road, provided that you keep a sharp look out on your way home…you wouldn’t want to get “victimized”, would you?

Eternity Comics reprinted the initial five chapters of the story as Victims in 1988.

The trade paperback collection has gone OOP, but reasonably priced copies are available through Amazon and ABE books.

Here’s the trailer for the 1973 Pam Grier film Black Mama, White Mama that just might have served up a bit of inspiration:[youtube]http://www.youtube.com/watch?v=TO13YpoLKAM[/youtube]