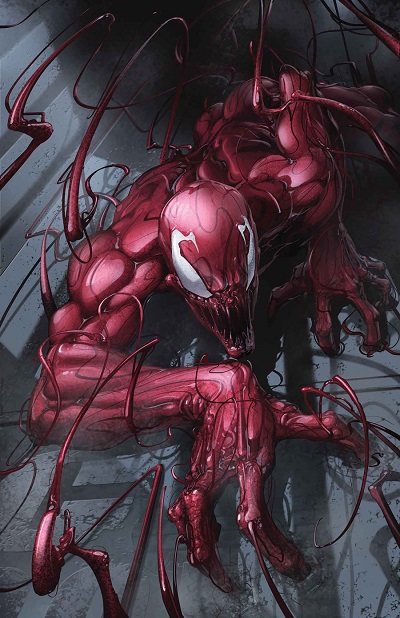 Mwa ha haaa!  With editor-in-chief Bobby away on business, the proverbial mice get to play!  Or at least in the case of this particular rodent, go rogue, as I peek over from my DC side of the fence to see just how green the grass is with those zany Marvel neighbors.  And what’s this?  As luck would have it, a brand new number one for me to jump on with in the form of this week’s Superior Carnage #1.  Well that should make this adventure easier!  So, armed with the paltry sum of foreknowledge that Carnage is a red Venom that some crazy murderer got ahold of, lets take a look together as we delve into this week’s Superior Carnage #1.

Things could certainly be going better for Ted Connelly.  A white collar criminal recently transferred into a maximum security prison for super-villains due to overcrowding elsewhere, he is well aware of his place on the food chain in this new environment.  Any pecking order can be swiftly changed though, especially when Carnage is introduced into the cycle, and one person seeks to do just that.  But lost in his desires to control the beast that he has set free, has this mysterious mastermind forgotten the limits of control for any being on a veritable force of nature?

I read three titles from Marvel on a regular basis, and as my luck continues to hold in this adventure, all three of them recently introduced me to the core characters of this story save Carnage himself.  And while all of these side characters were properly introduced here via contextual clues, the main character of Carnage is really only spoken of instead of spoken for.  Mind you, this is purely on purpose to match the story being told (as Carnage is not exactly in his right mind shall we say), but it does bring some worries for the future of the story if the titular character will be so singularly driven on a base level throughout the tale.  Concentrating on this particular issue though,  I was surprisingly not lost in the story being setup, which is quite the feat considering my limited Marvel background knowledge.  There were elements of dark humor peppered through the issue, and it did a fair job of setting the stage for the rest of the mini.  I’m not chomping at the bit for the next issue (which to be fair I have limited investment in the characters), but it did intrigue me enough to warrant the second issue; which is commendable in consideration of that previously mentioned lack of vested interest.

The artwork though, is very hit or miss in my opinion.  While the foreground fluctuates between hyper-detailed renderings and looser impressions of the characters, the background art is almost non-existent throughout the issue.  When present, it adds a lot of flavor to the art that makes specific sections stand out even more than its neighboring panels, but it also unfortunately highlights the lack of its presence elsewhere by drawing attention to that very detail.  Faces also seem to be a minor quibble, but do more than enough to get the feeling of the book across.  The splash of Carnage near the end of the issue is absolutely gorgeous though, and shows honest promise of some possibly exciting panels as the mini progresses.

Flip through it at your LCS before buying.  A good jump on point with all of the introductions built-in thus far for newer readers, it also lacks that driving force to really hook those new readers into excitedly waiting for that next chapter to drop.  Those with a bit more investment into the Spider-Man mythos may find a bit more bang for their buck, but as it is even stated in the book itself, ‘Isn’t this the sixteenth version’ of these events taking place yet again?