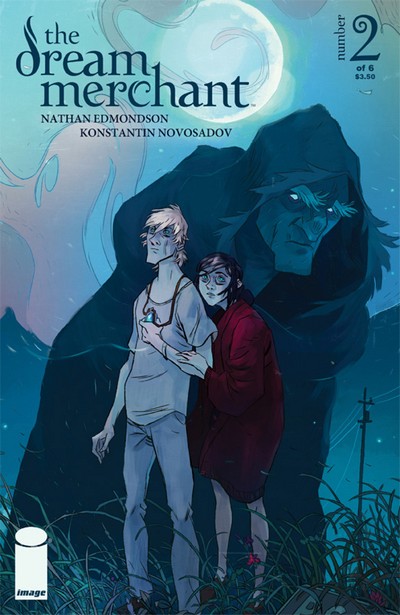 The Dream Merchant is the story of a troubled boy named Winslow who has been plagued by recurring dreams his whole life. His family’s inability to help pull him from the depression caused by his condition forced them to place him in a mental institute, from where he recently ran away after being pursued by mysterious figures who seem to have stepped out of his dream. An old traveler helped Winslow escape the creepy figures, but now the traveler will begin to enlighten the boy as to the reason behind his dream and the life and death situation he is now in.

Issue #2 begins the education of Winslow by this ‘dream merchant’. It seems what Winslow always believed to be a recurring dream is actually a piece of a memory that should have been completely deleted from the human race. He has the final piece of knowledge remaining of a race who once shared the earth with humans but chose to remove themselves, in the process attempting to erase their existence from every human mind. The beings chasing Winslow are ‘regulators’, sent to take back any slivers of memory of the race that they find, by whatever means necessary. The traveler claims his people have intentions to return and take what they want from the earth and that Winslow’s ability to travel to that dream place could save human kind.

As Winslow and his friend Anne set out on a journey to escape the regulators, the dream merchant begins to teach Winslow how to travel in his dream undetected, to control his dream world and learn from it rather than opening himself up to the terrors within. There is a definite sense of urgency here as the dark figures always loom in the distance of Winslow’s dream place, ready to pounce on his body while he sleeps. There is also a battle within Winslow, in which he fights to open himself up to friendship and trust rather than the utter loneliness and depression that he’s known all his life.

Verdict: Buy this. The Dream Merchant is such a special story, something quite different from most of what’s being written right now. It’s emotional and sad, dark and haunted. It’s a study in the ideas of lucid dream states and the possibility of other races who exist in realms that we are not comfortable traveling in. This is an intelligent, pretty book that presents some heavy concepts to ponder.