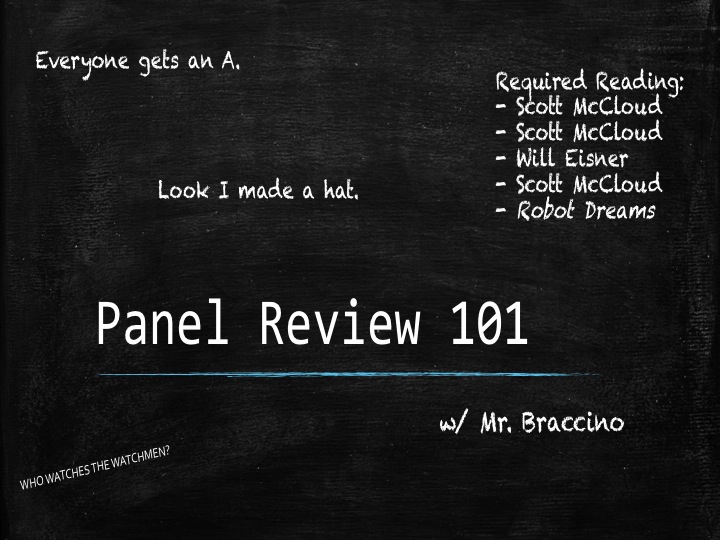 Objective: SWBAT close-read the debut of Superman through a careful analysis of the post-human imagery, gendered representation, and performance metaphor. SW also consider Siegel & Shuster’s presentation of a new dynamism in scripting and aesthetic.

Do Now: (Optional) Read Action Comics #1!!! It’s available at comixology.com for less than $1!!! You don’t have to, but, hey—why not? It is, after all, the comic that kicked off the Golden Age of those cape-wearing, superpower-wielding, mask-sporting tights-aficionados we so happily call Superheroes!!!

Despite adopting the Detective Comics initials for its name, DC Comics owes much of its superheroic philosophy to this initial Superman story in Action Comics #1. Under Siegel and Shuster’s storytelling direction, Superman’s debut juxtaposes feelings of terror and awe in its presentation of this new brand of post-human morality play.

It starts with the cover. Without opening the book—without having any prior knowledge of the character of Superman, what exactly does Shuster’s cover suggest about the story inside? Let’s break it down. First, in the foreground, a nameless, non-descript civilian (?) is running toward us. Next in the plane is the incredibly kinetic, incredibly violent image of a caped individual slamming a car into a rock. Behind this figure is dual image of fear: first, a man cowering dangerously close to flying debris and, second, another character fleeing for his life. Back to the caped figure; there is nothing, aside from the cape and tights and primary colored costume, to suggest that this character is the hero of the story. The imagery is violent: pieces of car flying about the page—meaning, no, Superman is not lifting this car off of and thereby saving the cowering character—and the background features a yellow and red wash reminiscent not of a shining halo but an explosion. Furthermore, the fleeing citizens are not adorned in the more traditional images of ne’er-do-well: zoot suits, fedoras, Tommy guns. These fleeing citizens aren’t even illustrated with the more recognizable marks of ne’er-do-wells: scars, Neanderthal-esque brows, claws. There aren’t even any potato sacks with dollar-signs drawn on to suggest these individuals were driving away from a crime scene!!!

So again, what is Shuster doing here? In his first appearance, without any context at all, Superman is surrounded by terrifying, terrible images of destruction and fear. Granted, we find out later that these fleeing men are hoodlums who have kidnapped Lois Lane (more on that later), but at this point, before even reading the story, what exactly are we supposed to believe about this character?

Superman transcends the human by overcoming the vehicle for the human’s individuality. This motif continues onto the next page, in which Siegel stages a montage sequence showcasing this new Superman’s history and powers.

After a brief panel informing readers that this Superman is not of this Earth, we are shown the following sequence of panels:

Of course, Siegel promises that Superman has vowed to “turn his titanic strength into channels that would benefit mankind” and be the “champion of the oppressed.” Nevertheless, after the first two pages, we’re getting a very new, very different perspective on just what sort of champion this Superman is.

The action of the comic then sees Superman embark on three different missions in his superheroic tights and one hapless evening in his oafish guise of Clark Kent.

Interestingly, Superman’s first act of justice begins with an image of him leaping through the air carrying a bound and gagged woman. Superman is attempting to halt an execution of an innocent woman on death row by bringing the real culprit to the Governor’s mansion. The Governor’s ornery butler refuses to admit Superman and eventually pulls a gun (most ineffectively) on our hero. Siegel and Shuster subvert gender roles here, centering this first bit of the issue on a female criminal.

The second sequence sees Superman—via a tip from Clark Kent’s cover at The Daily Star—confront a domestic abuse case. When Superman confronts the abusive husband (the wife has been knocked out), the husband first attempts to stab Superman with a knife and, after the knife breaks, passes out cold. By juxtaposing these two scenes, we see that Superman subscribes to a gender-neutral brand of justice that identifies men and women capable of both good and evil. Siegel and Shuster also complicate the notion of the savage, overpowering male by diminishing both the knife-wielding husband and the gun-toting butler as they fail to even scratch the Superman.

At this point, Siegel and Shuster have carefully toed the line between fear and awe in their presentation of Superman. All of the characters respond with expressions of shock and dread as Superman demonstrates his, for lack of a better term, superiority. Despite his very obvious posturing and insistence on exerting this dominance on those in his way (he forcibly lifts the butler over his head and brings him upstairs to the Governor’s room), Superman’s though, are heroic: saving an innocent from mistaken execution, bringing the real culprit to justice, confronting an abusive husband.

This cavalier superiority manifests itself most shockingly in the final sequence of the story. Superman denies Clark Kent’s assignment to go to South America for the Daily Star and instead takes the next train to Washington, DC. The choice is jarring because Superman is operating on a hunch that a US Senator might be corrupt, with little to no evidence or support earlier in the story suggesting this might be the case. Nevertheless, the senator is proven to be engaging in backroom deals, so Superman confronts a sketchy, mustachioed Mafioso character and runs along electrical wires in order to threaten the man into talking. This Superman has the ability to lift, carry, coerce men and women into physically dangerous situations in order to elicit the means to justice.

While Superman is busy wielding his superiority to both bring about and pursue his own avenues of justice, the alter-ego Clark Kent is a hapless reporter head-over-heels for Lois Lane. Back to the issue of gender roles, this short sequence, in which Lois finally agrees to a date with Clark only to have their dance cut short by zoot-suit wearing antagonists, sees Ms. Lane challenge Clark’s masculinity and walk out on our oafish hero. However, it is important to note that Siegel includes a caption that says that “reluctantly, Kent adheres to his role of a weakling” when he allows Butch to cut in on his dance with Lois. So, if anything, Kent’s performance continues the motif of human—in this case, male—weakness. Superman could (and ultimately does in the next sequence) wield his super-dominance and take care of Butch, but he must play the role of the human and maintain his cover.

By the end of Action Comics #1, what should we believe about this new hero? If we take the recurring imagery of human inferiority and the post-human ability to transcend the individual, Superman should evoke feelings of both dread and awe. And this ultimately is the foundation of the DC Universe. Whereas the Marvel U under Stan Lee’s bullpen of creators will ultimately ground the superheroes in the “real world” and ground his characters in the flaws of humanity, Superman would be the first in a series of heroes—human and non-human alike—that would become the Super Gods of the DCU. 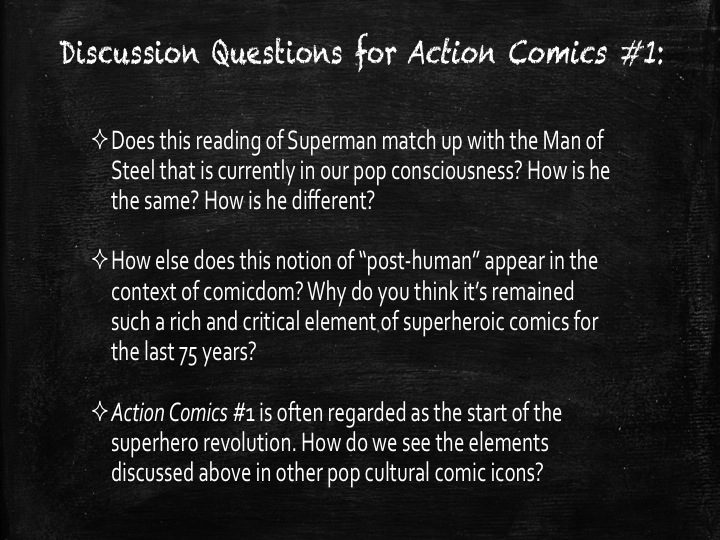