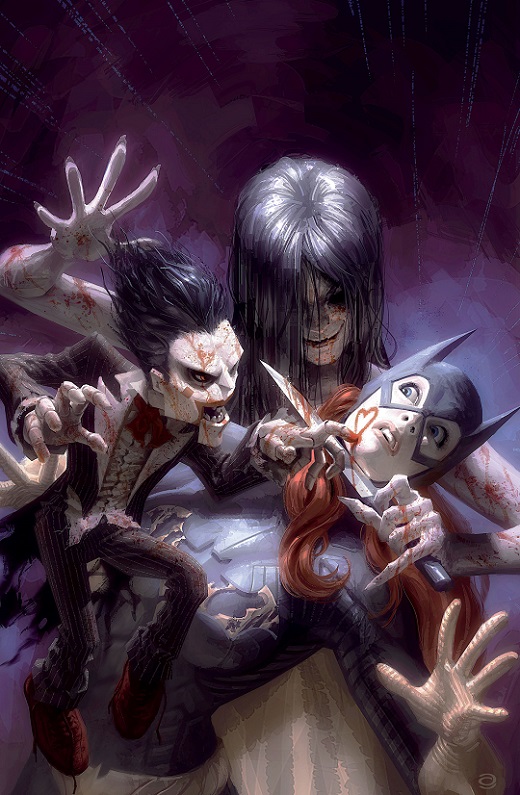 Batgirl #21 sees the conclusion of the two part Ventriloquist story, and man-oh-man everything just gets creepier. It’s almost Joker level on the creep scale of Batbooks , but with a slight twinge of supernatural tossed in.

Simone also does a lot of work with the characters in this issue. She gives us insight into the whole Gordon family, Dick Grayson and Barbara’s relationship, and some bonding between roommates. Simone packs all that in and still finds time to send Babs off to save a young starlette, and take down Ventriloquist without the story feeling cramped. It is masterfully paced.

As amazing as a writer that Gail Simone is, the art team really captures and sets the disturbing and eerie atmosphere. Pasarin captures so much detail in each panel, which just sucks you right into the panels. Not necessarily a great place to be with a murdering psychopath on the loose. The inks and colors from Glapion and Blond intensify what is already there. They are that slight breeze that sends a shiver down your spine and the creak in the floor boards as you walk down the dark vacant hall.

I don’t know why, but I was reminded of the 1999 Japanese horror film Audition while reading this. It’s been ages since I last saw it, but both the film and this issue share elements of tone and have a creepy as all hell female antagonist on her own whacked-out vendetta.

Buy It! This issue stands on its own fairly well, so it’s a good jumping on point, or just a nice nighttime read. The art, story, and characterization are top notch, and this ranks as one of my favorite new-52 Batgirl stories.