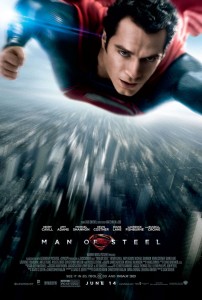 *This Review is Spoiler-Free*

Man of Steel was easily one of my most anticipated movies of the summer, nay the YEAR. It seems that lately studios have been getting comic book movies right and giving us something to hope for in the future.  The film starts out as a classic origin story, which is what you would expect from a rebooted franchise, but after that the film’s pacing takes a massive turn for the worse.  We go back and forth through Clark’s past and present but it doesn’t have any order to it. All of it could’ve easily been told chronologically, but instead Snyder doesn’t give us time to absorb what Clark is going through before taking us somewhere else.

Henry Cavill is spot on as both Clark Kent and Superman. The little kid that they cast as young Clark Kent (Dylan Sprayberry) looks EXACTLY what you think a young Henry Cavill would look like, so major kudos to casting for that. Cavill manages to really channel what a young Clark Kent might be going through at the stages in his life that he plays and is convincingly all of the things that he needs to be: morally conflicted, angry, confused, sad and he does it all without looking like a deer in headlights.

We all know that Michael Shannon and Russell Crowe are top-notch actors. Top of their field, really. Michael Shannon especially won me over after Boardwalk Empire and his role in the slow-burn film Take Shelter (if you haven’t seen it, you really should). Shannon’s character, General Zod is built-up to not really be a bad guy so much as a guy willing to do ANYTHING to ensure the survival of his people (so, basically a bad guy…), while Russell Crowe plays Clark’s Kryptonian father, Jor-El and we get a brief glimpse of him in the last dying breaths of the world. Overall, they’re both pretty convincing in their roles and do a good job of it. My only quarrels with them were Crowe had these dramatic arm gestures throughout the whole film that made him look like he was auditioning for a Backstreet Boys music video and Michael Shannon, in almost every serious moment, had these absolutely RIDICULOUS exaggerated facial expressions that just made him look like a cartoon character. Which, to be fair, should work but really somehow doesn’t.

And then there’s Amy Adams who was cast as Lois Lane. I’m a big Amy Adams fan and when she was cast, I was so hesitant because she just does not resemble that character. However, I got over it since I’d rather a good actress be cast in the role, than a bad actress who happens to look more like the character. However, after all is said and done, Adams still wound up just not fitting the bill for me.

Which brings me to one of my major problems with the film: the dialogue. I think a big chunk of why Adams failed in the role wasn’t because she was ill suited for the role, but because Adams was given such poor dialogue throughout the whole film. In fact, it seemed like her entire purpose in the film was to make Superman look good. I realize that in the comics, Superman saves Lois a ton, but I thought we had evolved in films to the point where we could also validate her existence by making her a smart character, that women could admire and look up to. We don’t really get to glimpse that smart character though; instead we’re just told numerous times that Lois Lane is a Pulitzer Prize winning writer and I guess that’s supposed to be enough for us to grasp that she’s more than just a pretty face. For me, it was not. Characters don’t get to be validated with titles; they need to prove their worth with actions and Lois’s actions in the film screamed perpetual damsel in distress.

Then there’s the issue of the choices that characters make in Man Of Steel. Everything that they do feels unnatural to me and they consistently make the most idiotic choices possible. There are examples, but I won’t get into spoilery territory. Things that characters say and do just don’t feel like their characters. Yuo can see the most prominent of these right from one of the early trailers, when a young Clark asks if he should’ve just let his classmates die in a bus accident and Pa Kent says “Maybe…”

VERDICT:
Man Of Steel is a beautiful film in terms of the cinematography and visual effects. It’s the full benefits of a massively budgeted Hollywood film. Some of the fight scenes look a bit like something straight out of a video game (perhaps Injustice!), but that’s to be expected when you have characters doing things that real people just simply can’t do. There’s just a lot of face punching and CG in these scenes not necessarily making them bad, just fake, to an extent.

After sitting through the 2 ½ hour film, that feels like a 2 ½ hour film, I’m left feeling so let down by the whole experience. I wanted so badly to not only like this movie but to love it and I just didn’t. I unabashedly love all of Zack Snyder’s films: Dawn of the Dead, 300, Watchmen, Legend of the Guardians: The Owls of Ga’Hoole and even Sucker Punch, but Man Of Steel did nothing for me.

Man Of Steel was just a mess that lacked a distinct direction and had no emotion and no heart… something that I think should be the very core of a Superman film.