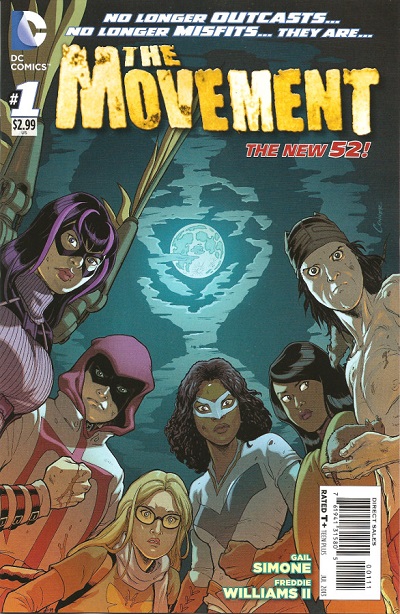 I’ll be frank, I went into this title with low expectations for quite a few reasons.  First off, the synopsis it was being sold on did little to push it as an enjoyable or different super-hero read.  Secondly, its marketing seemed to be linked to something that had fallen out of the zeitgeist many moons before the book even hit the shelves.  And finally, while I have enjoyed a lot of Gail Simone’s work, I have found it can usually take an issue or three to build up steam to the title she has envisioned.  Luckily for both my foot and mouth, I have improved in my efforts to reserve vocal judgement before reading a title, because this week’s The Movement #1 bypassed my three primary concerns and delivered an entertaining and intriguing first issue right out of the gate.

Set in the urban sprawl of Coral City, the common residents find themselves under the protection of a corrupt system.  The police have abandoned their posts for their own personal gain, murderers prowl their streets unchecked, and devils dwell in the heads and hearts of the children raised in this broken environment.  Pushed to their limit, a few young individuals of exceptional talents decide to abandon the system that has betrayed them, and stand at the head of the citizenry of Coral City as their own defenders of what is right.  But how can a ragtag group of kids overthrow an established force to forge their own paths?  Can disparate personalities come together in a mutual cause?  And most importantly, should they succeed, what justifies them as the final arbiters of the laws they themselves write?

Simone has created a very small story in the grand scheme of the DC Universe, but has surprisingly succeeded in avoiding the easy pitfall of such a tale by keeping the threats at a scale equal to the protagonists themselves.  Centering on 10 ‘measly’ blocks in a random city, there is no battle for the fate of the galaxy, or even the lives of a city; just the well-being of a few individuals that have decided to take matters into their own hands.  This laser focus onto the ‘background cast’ of the more bombastic titles is what separates The Movement from its other DC counterparts, while also making each member of that crowd more precious due to its more personal aim.  Even in this tiny frame of reference, Simone is still able to shove in antagonists that feel bigger than they are by combining corruption at the top levels of society, self-consuming rage from the bottom, and even ‘demonic forces’ entering the fray from the middle ranges.

The character work is interesting enough, as the individuals all have a unique power-set, and feels a bit like a poor man’s Stormwatch in the absurdity of some of their powers.  Simone brings Tremor over from her run on Secret Six, Katharsis in from her recent Batgirl appearances, a radical Willard-ization of Mouse, and what appears to be a new addition in Virtue; and smooshes them all onto a team with a common goal at heart even if they come at it from different angles.  While the issue does a splendid job of introducing these little (or not) known characters to the reader, there is minimal interaction between the teammates themselves in this issue.  I am absolutely certain that this is coming in future issues, as Simone’s biggest strength as a writer lies in her personable character interactions, but the personalities did feel a bit lean in this first issue because of it.

Freddie Williams II does a great job of selling the setting for what it is; an urban wasteland at first glance, but the homes of these people nonetheless.  The action sequences are kinetic and grab the eye easily, but I did have one or two issues with layout when following the panels.  These issues were easily rectified, but did pull me out of the moment when I ran across them.  Where Williams excelled though, is in bringing the facial expressions of these characters into play; a critical element in a title such as this as the tight scope will make the emotional resonance of these fewer individuals the driving force behind the entire book.  While taking place only at night, I am curious to see how the brighter scenes will play in opposition to the drab environments presented here, as a balance will need to be found in the long run.

Buy.  I’m as surprised as you are.  It’s not the heavy-handed liberal title it seems to have been marketed as, but instead acts as a rarely seen spotlight on a tiny corner of the DCU that has been let down by its heroes both super and mundane.  This first issue will give you a solid introduction and foundation to the direction of the title, and if Simone is able to bring her usual character work that she is known for into play, this could be an interesting title for people to follow.