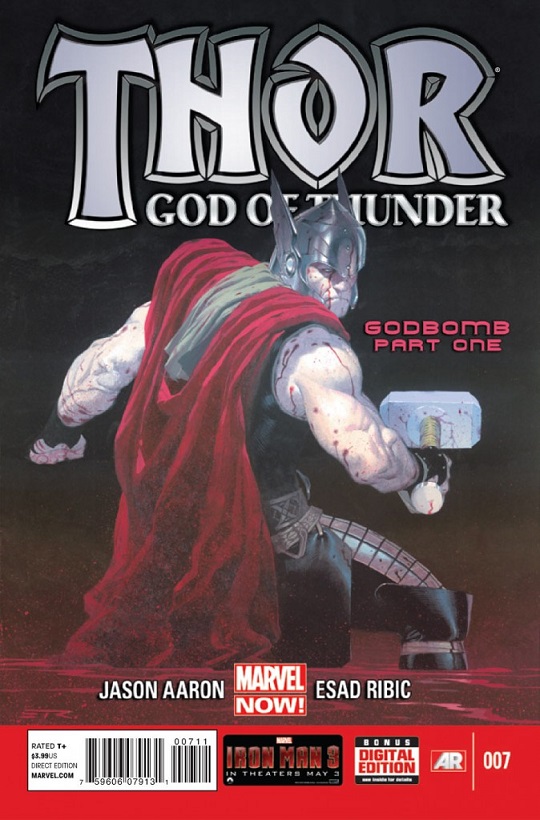 Jason Aaron’s run on Thor God of Thunder has been a thrilling adventure with no bounds, so far. With issue #7 a new arc starts and the hunt for Gorr the god killer continues.

This series is my first foray into any Thor-centric comics, but I have been enjoying each issue that comes out, and the current issue is no exception. Ribic’s art and Svorcina’s colors go hand in hand to create some darker, grittier art that complements Aaron’s story. There is that worn down, dirty, lived-in world (worlds?) feel to the art. It’s a very different style than some of the other, brighter, Marvel series.

Aaron keeps the perilous tone continuing in this new arc, but he doesn’t let that stop him from keeping things fun. This is one point that really draws me to Thor God of Thunder. It’s able to be a dark series, without sacrificing the fun, and delivers some pretty epic storytelling. Geez, I used two words here (dark and epic) that tend to get thrown around a bit too much these days. But hey, if the shoe fits, right?

The dialog between present day Thor, who is “currently” in the future, and future Thor is strong and quite humorous. Aaron does the humorous dialog well, and it is used appropriately and at the right moments. It feels natural and organic.

Of course we are dealing with time travel now and we have Thor teaming up with an older version of himself, so if they are able to defeat Gorr, then older Thor should remember, because it’s obvious present day Thor survives if older Thor is still alive, am I right or am I totally missing something? Whoa. Time travel. Paradoxes. Run on sentences. This could get messy. Nope! I love how Aaron defuses both mine and the Thors’ concerns. I won’t spoil it for those that haven’t read it, but it fits in with what I was saying about the humorous dialog. It all just boils down to, who cares how time works, how do we kill Gorr?

Buy It. Why deny yourself the awesomeness that is Thor God of Thunder? What issue #7 lacks in bloody, bone-splintering action, it makes up for in ale. Grit, Gods, Ale, and Hot Chicks. Thor has it all.

Jumping on point: This issue. If you want to know about who Gorr is, check out last issue for his origins.