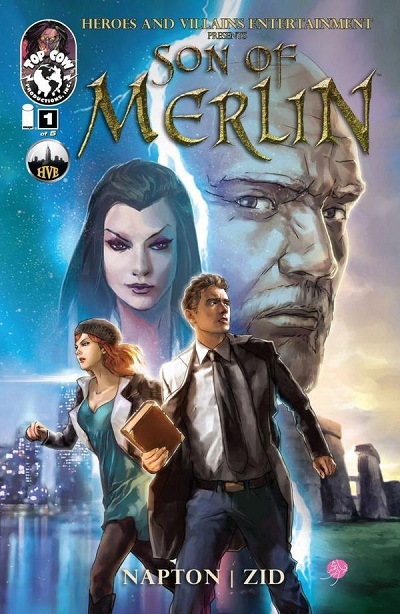 I’m well aware I am preaching to the choir of comic fans when I state the world we live in is extremely cyclical in nature.  What was once old is new again, until times or tastes change enough to relegate that object back to the old pile for a few years before starting the cycle anew.  The modern era of comics is a testament to this fact, as each week we find ourselves awash in another round of reinterpreted classic tales to choose from on the shelf.  In this climate, especially concerning a stable of Arthurian characters that have been around the block so many times they have their own carpool lane, it takes something special to stand out amongst the background din.  And luckily for us, Son of Merlin may just have that trait.

Set in the modern age, Merlin finds himself ensnared by the machinations of his immortal foe, Morgana La Fey, while rescuing his assistant Gwen from imprisonment at her hands.  Sending the final reliquary of his power out into the world to prevent it from falling into the hands of his nemesis, it magically (how else would Merlin do it?) finds its way to a young scientist named Simon Ambrose.  Confused with the extremely non-bookish actions the tome displays over the course of a day, Simon is sent even further down the rabbit hole when he meets Gwen; who informs him he is the bastard son of Merlin.  Unwilling to believe the tales he is told, can Simon and the apprentice Gwen find a course of action to stay alive as Morgana’s minions close in on their trail?

I know what you’re thinking, ‘Oh great, another Arthurian re-telling.’  *POW*  You know what that was though?  Merlin, the new no-nonsense wizard of badassery, punching you square in the face for your insolence.  While his part of the story thus far only takes place in the first half of the book, this modern take on a character that has been re-imagined countless times before comes across as a show-stealing alpha male who has earned every bit of his reputation through action; a great accomplishment in this first chapter that establishes him as the pinnacle that Simon will undoubtedly have to follow behind in his familial wake.

The other titular character, Simon, is easily setup as the eyes of the reader, pulled into this fantastical world of stories as his scientific mind struggles to accept the existence of these mystical powers.  Joined by the sassy Gwen, there should be an interesting dynamic as the two try to learn their way through the skills available to them as they fight off the advancing Morgana; whose sheer malevolence was portrayed in the most efficient manner possible during her short time on page.

While simplistic in its first issue setup, it is the execution that warrants the optimism at this point into the story.  With a setting virtually wide open when bringing these characters and powers onto the scene, the next issue or two will really set the pace as to what this title will be looking to deliver.  And if it can maintain the level of performance that it has shown in this chapter, it should be an entertaining read regardless of which path they end up choosing.

Artistically, I have to say I absolutely adore Mohammad Yahzid’s painted stylings.  Expressive in its presentation, it effectively gives off an aura of power and respect to the legendary characters that takes the heavy lifting of portraying these qualities off of Napton’s shoulders; allowing him to focus on the dialogue in a much more natural manner.  Showing he is not afraid to play around with layouts as well, the book maintains a fluid and natural reading experience without shying away from a few interesting design choices that keep the storytelling fresh in Son of Merlin.  The biggest compliment I can give though, is his meticulous background work.  I am hard-pressed to think of more than a handful of panels that did not include detailed backgrounds; a rarity in these painted styles as well as from independent publishers in general.  But, a choice that really makes the look of the pages stand out from its competitors, and provides a much more enriched story in the process.

Check it out!  The next issue should start to give a clear indicator as to the direction this title will take in the long haul, but as an introduction to the setting at large and the characters that populate it, it is an entertaining read that is full of potential.  Providing a textbook example as to how these reinterpretations can find a new chord on an old story, Son of Merlin may have found its time on the cycle has come.