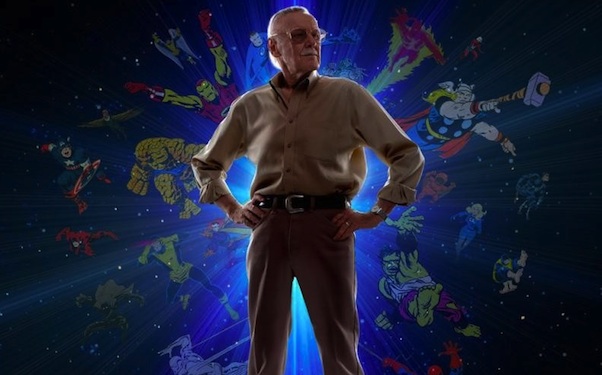 Released on DVD just before Stan’s 90th birthday on December 28th, this film is less a documentary than a series of conversations with “The Man” himself. That is not a negative, as what comics fan wouldn’t want to have a chin-wag with the co-creator of the classic Marvel Universe and its iconic characters. Don’t take me wrongly, there is information a-plenty to be found here, although it’s occasionally arranged out of proper chronological sequence. (If you’re a “Marvel Zombie” as I am, you’ll find yourself talking to the TV: “But that guy wasn’t working at Marvel then, so how could he get fired?”) There is also a fair amount of repetition of stories from other sources, but this is a minor quibble, as there is so much more that has not been seen in any of the other Stan Lee bio-pix, from childhood and family photos, through to oddities such as the sound recordings from the original Marvel Bullpen recording sessions for the MMMS (Merry Marvel Marching Society), and clips of Stan at university lectures and various TV appearances over the years. Within this collage, the directors never fail to give you a sense of the forward momentum of his career, from his humble beginnings as the Timely Comics office “go-fer”, to the architect behind the building of a more adult, inter-connected comics “universe” that would change the way graphic fiction would be thought of by both fans and critics.

That said, it’s not all upbeat, as the directors (and Stan, obviously) don’t shy away from controversy, as we’re taken back to the Fifties and the Dr. Wertham-led attacks on comics that nearly led to the end of Marvel before the Silver Age it helped to delineate, and  the conflicts over co-creator status with Steve Ditko and Jack Kirby are addressed, as are both their acrimonious exits from the company. Stan, as is his wont, always praises the men he describes as his “partners”, and shows heart-felt sadness over the passing of “The King”, Jack Kirby, and their unresolved differences. On these fronts, you get brief glimpses of Stan’s original pre-production synopsis for The Fantastic Four and his letter to Steve Ditko proclaiming him as the co-creator of Spider-Man.

We are also treated to a look behind the myth, as we get to visit with Stan’s lovely wife Joan, who shares stories (some very personal) of what “real” life is like for the Lees, and their charming interaction on-screen is right out of a screwball comedy from the 1940s, and quite something to behold.

This film is a “Marvel-ous” introduction to Mr. Lee’s body of work, and taken as a whole, this is a well-balanced visual essay on the life and career of the man who redefined what comics should be, and the audience they could be for.

VERDICT:  If you already own the long-form interview with Kevin Smith “Stan Lee’s Mutants, Monsters & Marvels”, there is a lot of overlap, but the new material makes this a must-see for everyone who is a Marvel fan, and if you have never had the chance to attend a convention panel with Stan, or had the good fortune to meet him as I did, this documentary will fill the bill quite nicely, and is highly recommended.

Soundtrack (kinda): This essay was written whist listening (well…watching, actually!) the Fantastic Four cartoons from the 1960s, which sadly have not seen a proper VHS/DVD/BR release to date! (Disney, are you listening?) rrr