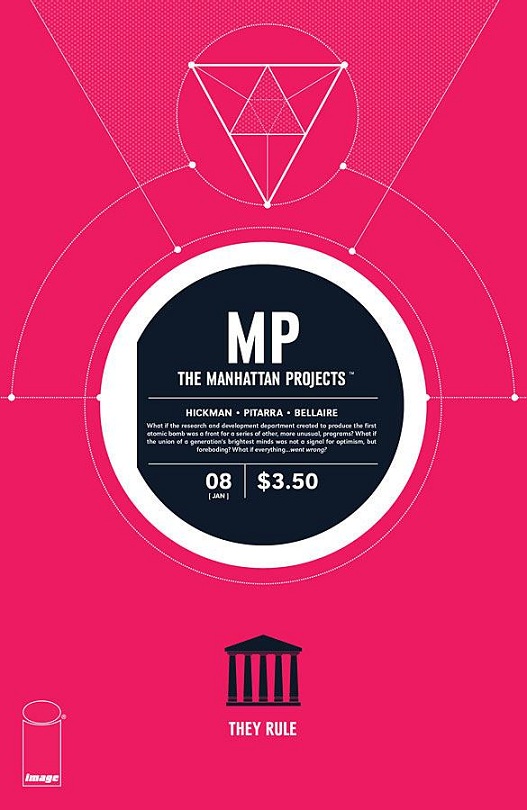 There is creative, and then there is eccentric.  Beyond that lies bizarre, followed by absurd, and just a bit further down the line sits The Manhattan Projects by Jonathan Hickman.  Now I am by no means stating this in a negative light, but if you start off at the source material of these real figures in history, and then make a second point on the graph as to where this book is now; lunacy is the only route you can take to link the two.  Nothing is sacred, and literally anything goes in this wildly insane tale detailing the exploits of the greatest scientific minds of the last century.  And if you don’t believe that this ‘liberal interpretation of history’ (understatement of the century) can create a story worth reading in issue 8; well, you would be the crazy one in this instance.

I’m going to try my best to give an overview.  If you think you read something incorrectly, odds are you comprehended it right the first time.  Deciding to ignore the objections of their respective governments and work together to advance the human race in order to thwart an imminent alien retaliation due to their earlier xeno-genocidal actions, the scientific teams of the USA (Feynman, Oppenheimer, Einstein, Braun, and more) and Russia (Yuri Gagarin, Laika the Talking Cosmonaut Dog, Gröttrup, etc) find themselves in the vengeful sights of the Illuminati (Conquistadori, President Truman, etc) for their insolence.  Utilizing their mole agent as an executioner, the ex-president FDR (now digitized into a computer system after death to become the first Artificial Intelligence) hijacks Russian robotics and goes on a killing spree in the headquarters of both camps at the behest of its Illuminati masters.  As Feynman and Einstein lay down a hail of bullets to keep themselves alive from the marauding automatons on the orbiting space station, it is left to the cybernetically enhanced ex-Nazi Wernher von Braun, with some assistance from cosmonaut Yuri and cosmodog Laika, to break through the defenses in his path on a desperate bid to save them all.

This title is a testament as to how far Hickman will go in a setting without boundaries.  Machine gun toting spacedogs, alien refugees, evil twin brothers with multiple personalities that grow in number exponentially, ridiculous Freemason rituals in the White House; each issue continually pushing the horizon further and further from its roots in its self-contained game of one-upmanship.  But the most miraculous thing of all, it is all icing on the cake of the characters themselves.  There is a certain sense of wonder to each one of these larger than life figures that carries over to their fictional counterparts.  Never content with the way things are, always striving to go beyond the limits of the present, it lends a tremendous amount of heart to figures that we struggle to feel any connection to in historical context.  This particular issue had me rooting for a sadistic ex-nazi who has committed unforgivable acts through the course of the series.  That, given a more serious tone, would be no small feat; but to give this same character a sense of pathos in these absurdist trappings is another level entirely.

Nick Pitarra’s artwork also functions on its own level of craft.  Cartoonish and goofy at first glance, each panel is also grafted with a palpable sense of unease in both linework and color.  As if the characters and stories we are reading operate on a grotesque level above our comprehension; and that we should feel uncomfortable even being allowed to witness their actions.  The designs capture an ‘Atomic Age’ aesthetic, sleek and elegant, as each machine hums with life as it performs its fantastical task.  Playful, yet gritty, a real balance has been struck; and its odd stylings mesh almost perfectly with the quirky story being told.  Much like the plotline though, I do believe it is an acquired taste item that will not resonate with everyone, especially in its more gruesome scenes.

I say buy!  I cannot stress enough that this may not be a title for everyone, but those that are looking for imagination without bounds will be elated to see this title every few weeks.  Fun, astoundingly creative, and beautiful to behold, The Manhattan Projects stands out as one of my favorite titles to grace my pull list in 2012.  Half of you will love this title, and the other half will call me mad.  But shouldn’t every fan of science be a little mad?

Jump-On Point:  With this title, you can practically start anywhere, as you will be rolling with the punches regardless of where you begin.  The current ‘arc’ would technically start with The Manhattan Projects #6 if you are looking for a bit more context.

P.S.  I hereby revoke my support of Lucky the Pizza Dog, and now swear fealty to the one true canine: Laika, the talking Russian cosmonaut dog with dual mounted machine guns and a taste for adventure.