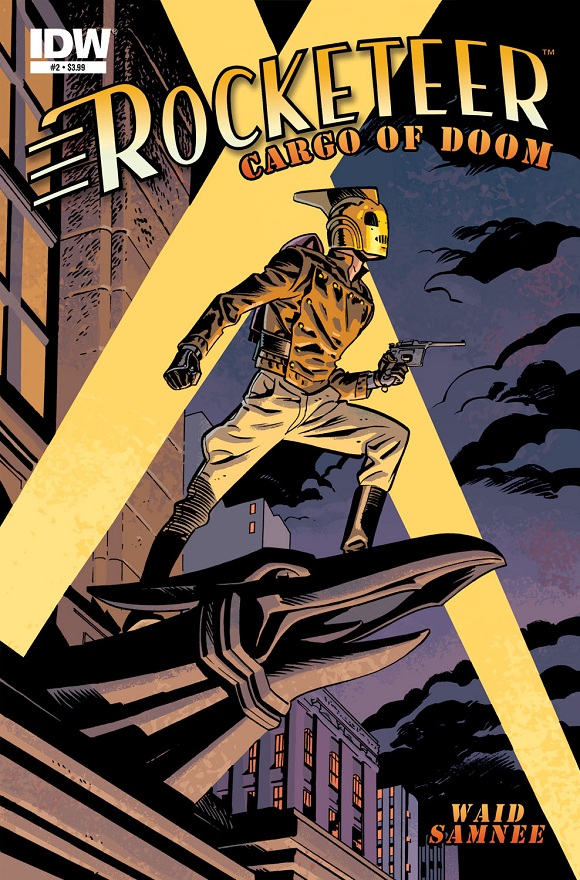 I love the Rocketeer. No matter who is writing or drawing the book, it’s just a whole lot of fun. It’s a simpler time. It’s simple characters. It’s a simple recipe for success: Guy with rocket, add some woman trouble, throw in some mustache twirling bad guys, and give them a personality resembling those circa 1930’s. Shake it up, and lay it on me. I have never read a Rocketeer story that I didn’t like, but what Mark Waid and Chris Samnee are doing with Cargo of Doom, is beyond great. It’s everything the Rocketeer should be.

Oh, Cliff. I’m not sure things ever go 100 percent right for you, but damned if you don’t try your best. People around the Rocketeer view him as a super hero, a la Superman or Batman in their respective worlds, but what they don’t realize is Cliff isn’t really anything like those guys. He’s just a regular dude, with the best of intentions and a ton of heart—who happens to have a cool helmet and a rocket pack. That’s what makes this book special. He’s trying hard to be the hero, but you know somewhere along the lines it’s going to go awry.  I don’t think it could go further from planned than how things pan out for Cliff in this issue. But just as I know things go bad for our hero quite often, I also know that he will find a way to make things right. For that, I cannot wait.

This is only half the fun of the book though. The absolute best part of the issue is the reveal of the cargo, and the resulting dastardly plan. I will not spoil it for you (because I’m a good person, and you should be reading it for yourself!), but it left me with the biggest smile on my face. I know Cliff is in danger, but I simply couldn’t get over how awesome the master plan was. It’s the kind of imaginative concoction I expect out of Axe Cop, but it’s from one of the best writers in the business—and it’s executed perfectly.

There were a few complaints people had with the first issue, though they seemed to be more of a misunderstanding of what the book is than to legitimate complaints. Other than people feeling uninformed, the main gripe people had was with Betty. Many reviews and general responses I heard was that she was, umm, not the nicest lady out there. This issue should completely make up for any of those criticisms. She is genuine, and you see why she may have been a little on edge. She legitimately cares for Cliff, and it is readily apparent. Waid has done a great job making all the main characters relatable, and Betty is certainly more so in this issue.

I wish somebody would chain Chris Samnee to his desk and make him draw every comic ever! He’s flawless. His classic sensibilities work so well with the Rocketeer that I’m not sure I want anyone else to draw it in the future. It’s clean, the lines are bold, and the coloring is outstanding. More importantly, everything fits the era. Nothing seems out of place, or too modern. That includes everything from what is shown in each panel, to the style and layout of the book. It’s a throwback style that I would like to see a lot more of, and, frankly, it makes me anxious for him to come back to Daredevil.

I’ve been promoting The Rocketeer Cargo of Doom #2 all week on Twitter, and you should do yourselves—and this amazing creative team—a favor and buy this book! There are few things like it on the stands (which is a travesty) and when we get something like this, it should be supported. BUY IT!