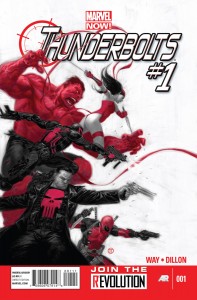 Last week the second teaser Marvel released read one word. Lightning. The internet populace immediately threw out their guess in a near unanimous decision that the hint was signalling a new “Thunderbolts” series. Yesterday Marvel revealed through Newsarama that the internet was right on the nose in their guess. Writer Daniel Way and artist Steve Dillon are bringing with them a very unique cast of characters to the roster. The leader of the team was a bit of a shock though. Red Hulk a.k.a General Thunderbolt Ross (I see what you did there Marvel) will be leading this team of villains turned “anti-hero”. The rest of the roster is rounded out with Venom, Deadpool, Elektra, and most shocking of all, The Punisher. Now Frank Castle has never struck me as much of a team so it will be interesting to see how he interacts with the rest of the team and how his philosophies meld and clash with them.

The book’s editor, Jordan White, talked to Newsarama a bit about the book. “T-Bolts has gone through quite a few shifts over the years, some more radical than others. This one is going to be a pretty big change in that none of the characters or plotlines from the previous series are carrying over. It’s a new take, but one that is grounded in that original idea that has always been woven into the fabric of the series, the hero/villain dichotomy, and characters bridging the gap between them. If you look at our roster, every one of our characters is a character who started out as a villain in their first appearances but who has, over the years, made the shift to hero… or at least antihero.”

I’m glad to see the Red Hulk not only back in a book, but leading a whole team as very soon his solo book will be re-hashed to become Red She-Hulk. Don’t get me wrong, I have an interest in how that book will turn out but what Greg Pak had been doing with Red Hulk in his solo series was a consistently good book coming from Marvel. Another question this new “Thunderbolts” series brings is whether or not Pak’s “Dark Avengers” book will continue long after Marvel NOW begins.