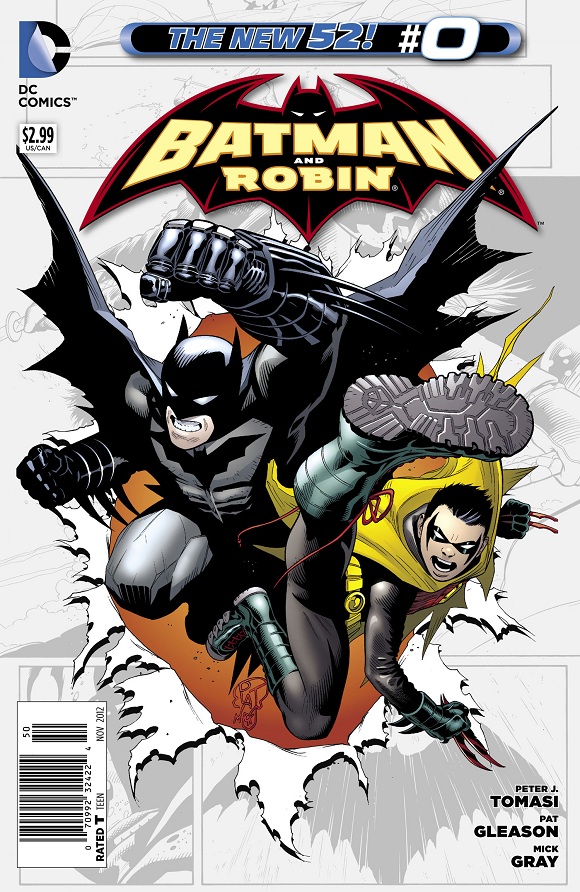 Damian Wayne is one of DC’s best characters. You may disagree, but you would be wrong. He’s the perfect match for Bruce, and creates a better dichotomy than any other Robin has in the past. Batman and Robing #0 made a good choice by focusing, for the most part, on Damian’s life pre Batman. We get to see more of how Damian was raised– which would certainly be cause for social service intervention in today’s society— and in its best parts we see that Damian is still a kid. He is still a curious little guy, and he just wants to know about his dad. It’s natural, and though he is still a cold blooded killer, it’s nice to see that side of him. To me, it’s continuing with an idea that Damian is deep down just a regular kid, but because of his upbringing, is compelled to put on an antagonistic front.

All the stuff with Damian is good. It’s not groundbreaking, but it is good. That may be why I wasn’t as enthusiastic about this book as I was about the Swamp Thing or Animal Man issues. There really isn’t much that Morrison hasn’t already given us in his time with the character.  In fact, it ties directly into Morrison’s run. It is a good story, but because it’s not really new ground, it felt a little (we should just make Talking Comics shirts with Stephanie’s face on the front and this word on the back) unnecessary.

Patrick Gleason and Mick Gray do well enough in handling Damian’s origin. There isn’t a real jarring change in style, which is great when two artists are on one issue. Things can get a little unusually round at times–and it may just be me getting used to this style after looking at books by Greg Capullo and Sean Murphy. Action is carried extremely well, and Gleason has always brought Damian’s personality to life as well as anyone. More so, the panel layout in Batman and Robin is great. Gleason is able to give innovative pages that break up the monotony that some comics give us.

If you are new to the DC Universe, and need this to find out about the best Robin ever, then pick it up. If you know and love Damian, then you will definitely be able to pass, and you won’t feel like you’re missing anything.