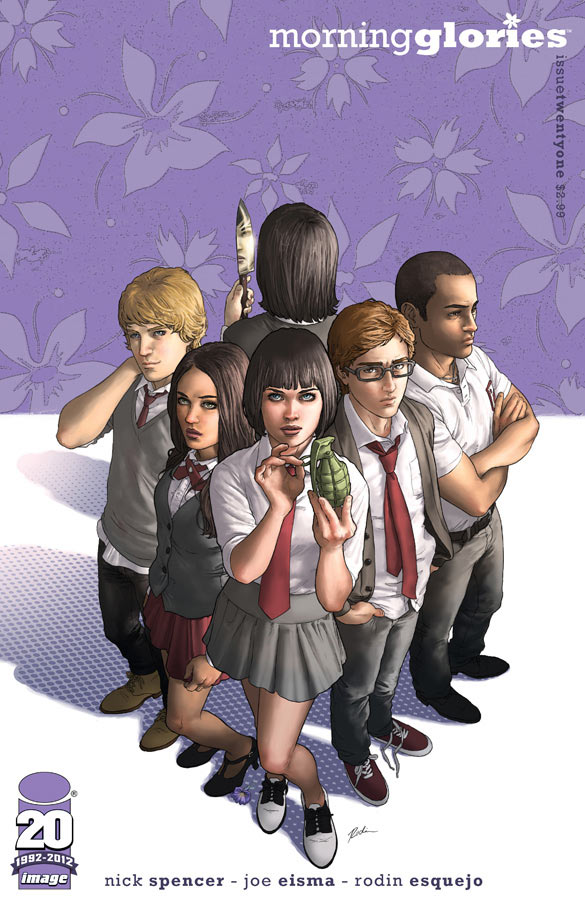 Things aren’t always what they seem at the Morning Glories Academy. So far in our journey inside of the sinister prep school we’ve only dealt with a finite amount of the students during the first three major arcs of the series. But all of that is about to change, as Nick Spencer and Joe Eisma add a few new players to an already cryptic and twisted cast of characters. Guillaume we’ve already met, but who are Vanessa, Fortunato, Akiko, Ian, and Irina? Are they friend or foe? How much do they know about what’s going on within the academy? And, perhaps the most important question … how long have they been waiting to execute their plans?

Of course, we’re not going to get the answers to those questions now. Things are just getting started, and if you’re at all a fan of Morning Glories you’ll know that it’s going to be a while before we get any answers. You see, the thing about Morning Glories is that it’s a slow burn series with major payoffs sprinkled throughout. Rather than just give you the information you desire for a perfect explanation, the book answers your questions in carefully portioned bits, while baiting you with more to chew on with each issue. Be impatient if you like, but as a seasoned fan of the series, I urge you re-read what you think you might already know … and then think again.

No one is to be trusted anymore inside the walls of the Morning Glories academy. The familiar faces walking the halls, your teachers, and even your friends may very well be working against you and you’d be none the wiser. What you take to be coincidence may very well be the catalyst for your demise. With at least six new characters added to the story’s student roster we’re given six new reasons to be afraid. In my opinion the obvious standout personality of the new students is Irina. She’s a competent, fierce, agile, and a deadly woman on a secret mission to keep the goals of the academy in check; even if that means killing a few students to get the job done. She’s the one that you want leading the charge, the one you want watching your ass.

With a brand new arc to look forward to and the knowledge that the Morning Glories ongoing  could possibly last a whooping 125 issues (maybe more), there are so many reasons to get excited about this issue. Always building upon the groundwork that’s been laid  in previous issues, Morning Glories feeds off of your curiosity and begs you to question your safety and even your loved ones loyalties. I find myself always looking over the shoulders of characters I care about in this series, and for me that makes this a damn good series and an exciting new issue.

VERDICT: Of course you should buy it. Morning Glories is a Talking Comics favorite but I urge you all to take the time and money to go back and read from the beginning. As much as I’d love to tell you that you can just jump in on what is one of the best comic book series on the racks today, you’re going to need to school yourself if you want to get the full enjoyment out of this series. With all of the previous issues collected in 3 trade paperbacks you’ve got no excuse not to get enrolled and join the insanity that is the Morning Glories Academy.

* This review was written while listening to the Awesome Problems EP by the band Gothic Tropic.