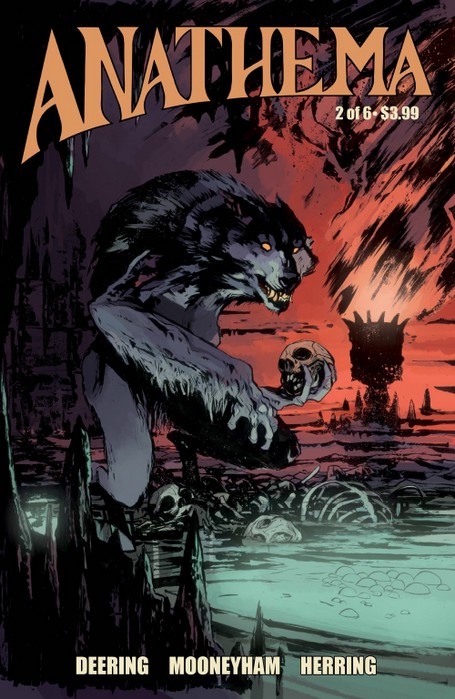 Mercy is a gorgeous, skilled, independent woman who had the bad luck of being born in the wrong time. She lost her love, Sarah, to brutal witch hunters and witnessed Sarah’s murderers in turn being massacred by an evil cult of raven beings. The ravens plan to resurrect an ancient vampire lord, Aldric Karnstein, who has a fondness for eating the souls of desperate women. Mercy is on a mission to save the soul of her late beloved and destroy the ravens before they massacre any more innocent people. She asks for the help of an old friend, a reclusive occultist, who grants her the power of a werewolf to track and battle the ravens. I know, there’s a lot going on here, but I promise this story is not hard to keep up with and well worth it.

Written by Rachel Deering, art by Chris Mooneyham and Ian Herring, Anathema is an engaging story that cleverly intertwines romance, ancient folklore, mystical evils and the personal struggles of a woman who has lost everything. The art maintains a gothic, moody vibe that befits the dark story as well as the setting. Anathema #2 begins Mercy’s journey to track and fight the ravens as they slaughter innocent villagers and the illustration of this is brutal and bloody, as it should be.

Most of Anathema #2 is narrated directly by Mercy, who struggles to come to terms with her drive for vengeance. She questions her own motives as much as those of Sarah’s murderers. In the meantime, she discovers that in her werewolf form she is, herself, a monster of the night, and will be feared by innocents as well as by her prey.

Verdict:  Anathema is an emotional, heavy horror story with many layers, all of which are quite enjoyable. Rachel Deering does a great job at creating a protagonist who you both sympathize with and feel leery of. The artwork of Anathema is rich and pretty, and suits the old, spooky vibe very well. I definitely recommend you pick up Anathema #2, and Anathema #1 if you haven’t read it, as it’s an excellent example of what a quality horror story should be. Werewolves, vampires, evil ravens, occult spells and angry women seeking revenge; you couldn’t ask for much more packed in to one story.