FacebookTwitterPinterest
Whatever happened to that nameless man, that zombie priest? Come find out in our review of The Goon #41! 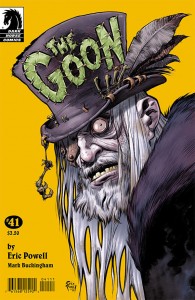 Whatever happened to that nameless man, that zombie priest?

The Goon #41 brings back the Zombie Priest, reintroducing the classic foe after his epic defeat at the hands of the Goon. The Zombie Priest was defeated before the reboot of the series, and has since been licking his wounds behind the scenes to plot his revenge on the Goon. Issue #41 flashes back to what the Zombie Priest has been up to since that defeat and what he’s had to do to get his evil mojo back. The critical lesson that Powell showcases when the Zombie Priest talks about his victims is that they were blinded by greed and ambition to ignore the cost of their actions; the Zombie Priest couldn’t hurt them unless they asked for their horrible ends. That’s the key to the Goon’s immunity to the Zombie Priest, the Goon doesn’t have any greed or ambitions.

The main story closes with a hint to the new big bad of the series, perhaps to cut in on the Zombie Priest’s tuff or to alley with him, but either way we figure he’s up to no good.

The second story in the book is a real gem, co-written and drawn by Fable’s Mark Buckingham, this story gives us the simple and loveable monster-of-the-week story that makes Goon so timless and enjoyable. Buckingham’s art is always a pleasure to take in. Though Fables gives us some thrills and chills, it can’t be compared to the level of gruesome that Buckingham rolls out of The Goon. The story is a multi-parter so I am eagerly awaiting more installments of this awesome collaboration.

Buy it! Since the title’s return, Issue #34, Eric Powell’s been bringing the old black magic each month showing off all the charm that got us hooked on the title before the relaunch. I also want to keep on supporting this book on the hope that we’ll finally see The Goon movie!