It’s Wednesday and in addition that meaning it’s new comics day, it also means that it’s time for a new Talking Comics podcast. We’ve all missed you since last time and as such, we take the time to answer some questions from our wonderful listeners and we discuss a big topic: what makes a perfect comic… according to us.

Before we get into that though, we start things off the good ol’ fashioned way, with our Books of the Week.

Steve can’t pick just one comic and talks Lenore #6, The Creep #0 and Jeff Lemire’s Lost Dogs, Bobby loves Spider-Men #4 and Bob talks about Go Girl #3, It Girl and the Atomics #1 and Wonder Woman Adventures 100-Page Spectacular. Last but not least, Stephanie (who has returned!), in obscure webcomics fashion, talks about one of her new favourite digital series’, The Abominable Charles Christopher by Karl Kerschl, which can be found at www.abominable.cc.

Oh, and TC fan, RepStones (on Twitter) asks Stephanie to pronounce an athletes name from the Olympics which just came to a close. Just so you know what kind of name she was up against, check out the reference photo she was sent: 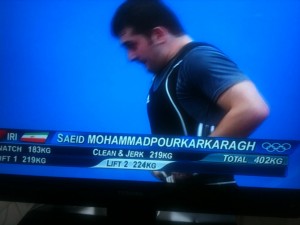 We say it on the show, but just in case you missed it, the Talking Comics crew on Twitter are: