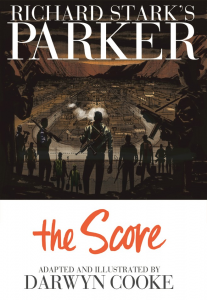 The Score is one of a series of other graphic novels by Darwyn Cooke paying homeage to Richard Stark’s (aka Donald Westlake) character, Parker, and a series of novels featuring him. Set in the 1960’s, Parker is a ruthless, cunning, and brutal criminal carving his way through society and the criminal underworld. Cooke’s style, and his ability to recreate that time period on the page so well, makes him the perfect artist to represent Stark’s narrative and characters. Come check out why The Score is an excellent example of period and crime thriller comics.

The storybeings  after the events of The Outfit, Parker has a new lease on life with a new face and a new job. Events being to unfold when Parker learns the full scope and magnitude of the job. Book One establishes the plan and introduces the players. The number of players involved is a twist for both Parker and myself, many new faces and pieces to the puzzle. As they are introduced I ponder how Parker will deal with them or how the mastermind behind the scheme will deal with them all; including Parker.

Book Two lines up all the pieces and continues to poise the character’s personalities and styles against each other. You get the idea very quickly there’s too many chefs in the kitchen and while things run smoothly the question keeps hanging in the air about what will break. Book Three brings it all together and we see all the villainous aspects of each of the players during the big score.

The whole thing screams, “Operation Grand Slam,” but James Bond is a villain working with Goldfinger and you still expect to see Bond defeat Goldfinger. And that’s the best part about it, you know Bond would have just released Goldfinger to the proper authorities and called it a day with the Femme Fatale of the feature, but we know immediately Park is a different and more complex animal. Watching the tension unfold, and Parker’s shark-like temperament interact with the characters and situation, is delicious.

The art itself is that seamless, consistent, and reflects that feeling of the period. Cooke seems to always have a good appreciatation for the that period and it shows in all of his work. The one thing I will say though is be prepared for a lot of yellow. The entire book is toned with yellow, and I think that’s done to signal the level of greed represented in the book; especially when you consider the fact that the heist is meant to target a gold mine and a pattern about people taking things out of turn against the interests of the group.

The verdict: buy it. If you’re in the mood for a nice crime thriller this should be with you in the check-out line with the two other Parker books. Cooke does an excellent job of keeping the story true to Richard Stark’s vision of the character and his art style does an even better job of reflecting the tones and time period of the 1960’s. On a side note Cooke was originally slated to complete four Parker books, making the very next a possible hard goodbye for our favorite criminal.