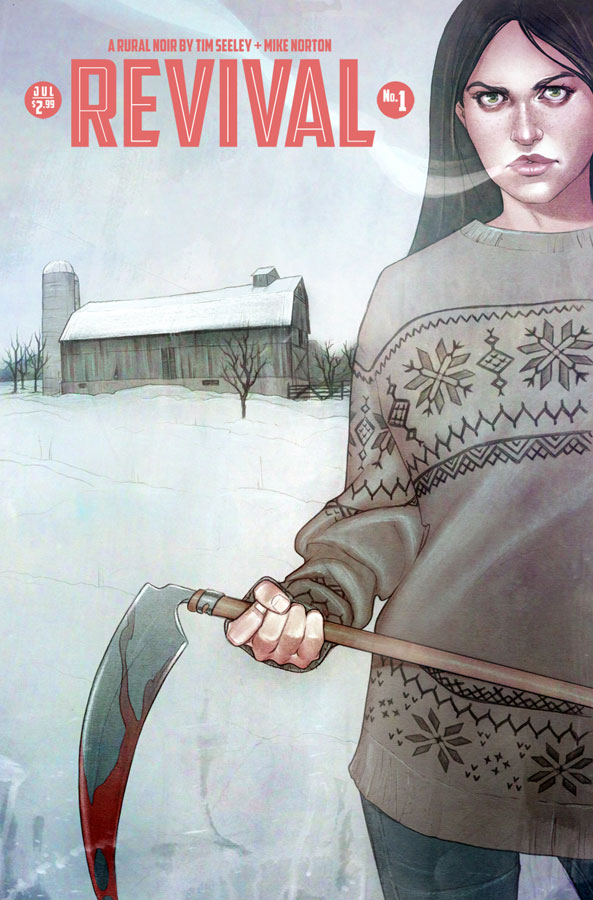 A creative writing essay on yellow legal pad appears over images of a snowy Wisconsin town. These images are the kind of quaint americana that, to many of us, only exists in the memories of our elders or in Norman Rockwell paintings. Yes, all seems well in the quiet hamlet of Walisau, but then, as quickly as that idealic setting materializes, it transforms into a nightmare of bloody hooves. This is Revival#1, the new ongoing series by Tim Seeley, and it’s one of the most interesting books of the year.

What’s happened in Walisau, Wisconsin to create such a stir? Well, you see, there was one day where the dead people in town came back to life. They aren’t zombies or mindless ghouls, and in fact they seem pretty much like the people they were before, none the less there are folks living who should have died. So now the government has cut the community off from the rest of society, and it’s up to officer Dana Cypress to make sure things stay civilized. But, when she is called to the scene of a murder it becomes quite clear that life isn’t going back to normal anytime soon.

A crucial element in setting up a rich mystery is how you build the world your characters inhabit, some of the best thrillers, stories like Twin Peaks, Fargo,and It, all share one important element, an amazing sense of place. Revival #1, like the tales mentioned, creates its sense of bizarre realism by leveraging what is commonly thought of as the safest part of American culture, the small town. Writer Tim Seeley uses the most treasured elements of these little communities, the close knit relationships, the rural landscapes and the self sufficiency, and turns them into the very things that threaten to destroy the inhabitants. His “farm noir”, after only one issue, feels like a worthy addition to this pantheon of stories.

The beautiful thing about Revival #1 though, is not that it reminds me of these other wonderful stories, but that it also manages to blaze a trail all its own. After all you would never hear Marge Gunderson talking about the dying Zorse population – that’s a combination of a zebra and a horse – and even in David Lynch’s utterly bizarre Twin Peaks, you wouldn’t see a possessed elderly woman swing a sickle like some sort of geriatric Grim Reaper. These outlandish and unique occurrences only serve to make this once sleepy Wisconsin township feel all the more like a living breathing place. But let’s face it, no small town would feel 100% authentic without some good old dysfunctional family dynamics to play with and Revival has those right at its center.

Tim Seeley is working in broad strokes for this first issue, the stern disapproving father, the daughter who wants approval and Daddy’s little girl gone astray, are not new ideas, but he uses this well worn territory to immediately engage us with characters who get very little page time.  We even know scant information about our lead Dana, but what we do know – mother, hard working cop and loyal daughter – makes her instantly sympathetic. It’s a classic, “in over her head” story and it works perfectly.

Buy It – If you like tantalizing mystery, dysfunctional family dynamics and zebra/horse hybrids then Revival #1 is the book for you. In just one issue writer Tim Seeley has crafted a fascinating beginning to the tale of Walisau, Wisconsin’s resurrected residents and laid the groundwork for a twisting and disturbing detective thriller.