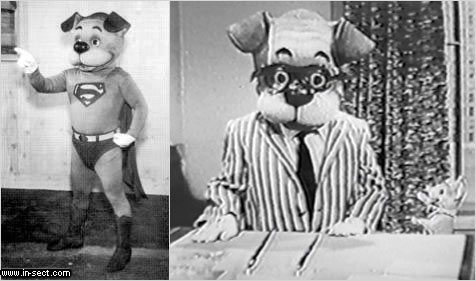 Not to beat a dead horse, but some of these equines need a good thrashing—so with only a little further ado, here are your kindly old Uncle Bob’s picks for the most awful comic-to-movie translations ever.

A quick word regarding methodology: these films and television shows have been selected using a stringent system of checks and balances, weighing budgetary concerns, film-maker’s intent, studio interference, mis-use of source material, and of course, general rotten-ness—all blended together using my patent-pending “Opinion-maker Deluxe”.

As usual, all decisions are final, and employees of “Talking Comics” and their families are not eligible to win.

(This poll not valid in Utah & Vermont.)

I have to admit that solely due to Helen Slater’s performance, this film is a guilty pleasure of mine—but it doesn’t keep it off the list!

This X-rated parody of “Flash Gordon” is the grand-daddy of the “adult” versions of TV shows/comics out today!

Only a truly inept film-making team could turn one of the greatest comic properties in history into this steaming pile of poop. Roger Corman’s $1M version is “The Avengers” by comparison!

It was impossible to pick one, so they’re both here! The 1966 pilot, which features Linda Harrison, Nova from “POTA”, is a mean-spirited attempt at “ugly duckling” comedy, but the big-budget David E. Kelly “Ally McAmazon” pilot is actually worse!

I know, how could a film with Tanya Roberts in a leather/fur swimsuit not be worth watching—buy the poster instead!

“You must be off your rocker, kindly old Uncle Bob” I can hear you saying—but hold on. We meet Kate Bosworth as Lois Lane, “veteran” reporter who now has a 5-year old son—but based on the movie’s time-line and her age, she must have started on the Planet delivering papers on her bike—and don’t get me started on real estate deals and “Super-snooper”.

You haven’t lived until you’ve seen David Ogden Stiers of “M*A*S*H” as the Martian Manhunter.

The Sci-Fi (Sy-Fy?) mark of quality tells you all you need to know.

This does feature the first live-action appearance of Banshee and Emma Frost (headmasters of Xavier Institute, no less), but having soap actress Finola Hughes as Emma—oy.

Jim Carrey and Tommy Lee Jones battle the script to within an inch of it’s life crafting a deadlock as the worst Batman villains ever—but their joint title wouldn’t last too long!

Talisa Soto as Vampi cuts a fine figure—so take a quick look at the DVD box and put the movie down. Horrendous, and yet Vampirella “creator” Forry Ackerman wanted a writing credit for this?!?

Frank Miller of “Sin City” doing an adaptation of Will Eisner’s “noir” masterpiece “The Spirit”—a match made in heaven, right? Well, so was the Kardashian/Humphries marriage.

I can only assume that they didn’t use the number “3” in the title to avoid the dreaded “Trilogy Curse”—sorry, we can all count!

#7. Lost in Space (1965 TV or 1998 movie)The charming Gold Key comic “Space Family Robinson” gets fed through the grist mill and turned into this dross—twice!!

Cap with a Plexiglas shield, a motor-cycle helmet and super-vitamins! Give me Matt Salinger any day of the week, even with his rubber ears!

Nothing says “The Man of Steel” more than Richard Pryor, right?

The only good thing you can say about this turd is that Joel Schumacher won’t get his hands on any more super-heroes. No, I take that back—you can play a drinking game using all the howlingly bad lines! “Don’t leave the cave without it”, indeed.

These two “specials” are now available from the Warner Archive Collection—would that they had stayed lost. The first, “The Challenge”, was just a misguided attempt at re-capturing the spirit of the 1966 “Batman”, and as such wouldn’t have made the list. The follow-up is legendary—a super-hero roast of Batman & Robin (Adam West & Burt Ward!) hosted by Ed McMahon!

Do I really need to say anything? Another bad Halle Berry performance, a crazy cat lady, basketball games, Sharon Stone..is there anything good about this movie, except that it ends in under two hours?   I came across a postulate a while back that stated that actors who disgrace their Oscars with dreck like this should be forced to turn them in—I agree.

And now the moment you’ve been waiting for…

Uncle Bob’s pick for the worst comic book to

movie adaptation of all time is…

With  the George Reeves “Adventures of Superman” winding down, DC commissioned this show which featured “little people” in dog heads and costumes, wearing human clothes…and the Superman outfit! An utter embarrassment that must be seen to be believed, even allowing for the “un-PC” times it was made, and the absolute lowest point in the Superman universe.

See you next time—provided I can cleanse my brain; after thinking about some of these for an extended period I really need a stiff drink!