So, yet again it has come to pass, another month and another stellar issue of Jeff Lemire’s Animal Man. Last month, Lemire took a detour from the main story to show us a little of “Tights” – the film Buddy Baker starred in before the events of this arc – and while it was an interesting tangent to go on, it’s infinitely more satisfying being back on the road with the Baker family. 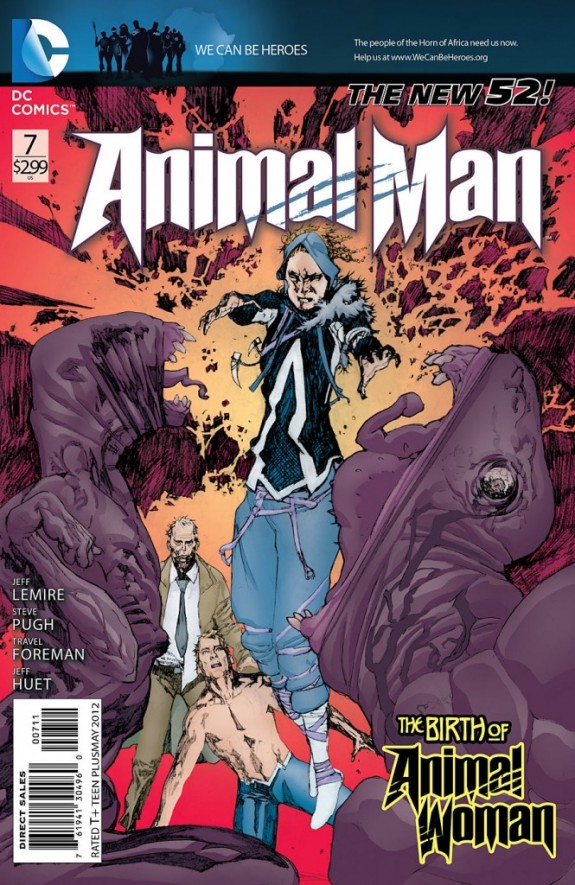 Jeff Lemire has been masterful during his run on this title at balancing the spectacle of terror that is The Rot, with the moment to moment minutia of family life. But as good as he has been at doing it in previous issues, Animal Man #7  may just be the best job he’s done yet.  The opening pages of the book, where Buddy and his family bicker about where they should take the RV, is as organic, and authentic to real life as any slice of life book I’ve ever read. There is a sense of levity and playfulness in these opening pages that could easily be lost in a such a dark tale, but Lemire refuses to let you forget the humanity of his story and it’s that fact that makes this book so special.

All this focus on the domestic side of our hero doesn’t mean Lemire forgets to bring the horror. There are gripping pages of the newly infected animals assaulting humans and in the background of almost every scene we hear news reports or see evidence of The Rot’s ever quickening conquest of the natural world. This gives issue seven of Animal Man the same vibe as the beginning of a great zombie film, and that foreshadowing keeps the tension ratcheted up to eleven. The book then decides to break the dial clean off with a scene that had the oddest mix of “hell yeah” and “oh no” I have ever seen. It also painted a picture of what is to come in the Swamp Thing crossover, that has my geek glands salivating for more.

The team of Travel Foreman, Steve Pugh, and Jeff Huet manage to become as one artist here. There was never a moment where I felt the art was inconsistent or felt like it was the work of more than one hand. I’m a self proclaimed writing nerd so it is rare that art is as important to me as prose, but in Animal Man I feel like it defines the book just as much as Lemire’s writing does.

Buy It – I feel a bit like a broken record at this point, but there is probably no better superhero book being written right now. Lemire is a master craftsmen who never forgets that humanity trumps histrionics any day of the week. Every issue both satisfies on its own merits and leaves me depressed that next month is so far away. Ignore this book at your peril.