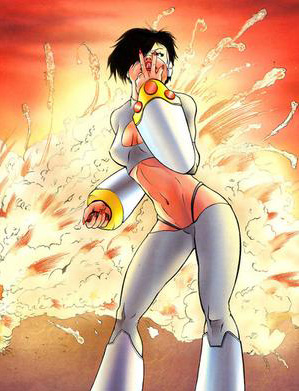 Written and drawn by Jimmie Robinson

The year is 2112, and the world has gone to shit. You see, a while back a woman known only as Bomb Queen nearly destroyed the entire world. Now she’s back, but only this time she is able to travel along a universal neurological link that all human beings share known as The Singularity. This issue follows a team of Shadowhawk Enforcers, a futuristic military outfit in charge of maintaining control over what is left of the worlds population. As they search for a underground cult known as NUL they delve deeper into the strange happenings surrounding Bomb Queen’s resurrection.

Yeah, there’s a lot going on here. It’s important to note right off the bat that this issue is filled to the brim with text. Bomb Queen having been around since 2008 has racked up quite a history for herself. The book does a fine job of giving you the overview of her past exploits and you should have no problem latching on to this 4 issue run at the very least. The language of the book, while often coming off as pure silliness, struck me as a real commentary on the youth of tomorrow, if they continue to be ruled by the internet.

So the interesting thing about The Singularity is that it links all humans into a system where at a time when it is needed, that particular human can invoke the power of the Shadowhawk Helmet. The helmet allows the wearer to perform feats of magnificent strength and agility for a short time. This unique security system seems to keep crime and murder in check as citizens use it to police themselves. So what happens when a woman in the form of a virus threatens the entire system? That’s Bomb Queen in a nutshell.

Is it a good book? Indeed, though it might be a bit much for recreational comic readers to take on. Because there are only 4 issues in this particular run each page is filled with information. So much information in fact that pretty early on I was feeling overloaded with it. There’s obviously a lot of history to cover so perhaps we’re just getting it out of the way up front, which is something I respect. I like the character of Bomb Queen. She’s a total bitch and it just makes me laugh. Rude, vile, and sinister she plans to destroy what’s left of the planet and corrupt The Singularity at all costs. The team of Shadowhawks, while often funny in a pitying kind of way, were a good enough to tell the back story but I’d be lying if I said that I was sad to see them go. An aspect of the book I thought was super cool were these little holographic Factoid ads that would run inside the optic nerve of each human citizen. It was a clever way to get some of the history out of the way while at the same time make it entertaining.

A whole hell of a lot from the looks of things. Though the book gives you all the information you need to know so you should be able to jump right in.

Wait and see. I’m not sure that Bomb Queen is something everyone will be able to get into. I wanted to try it out because quite frankly there wasn’t much else to pick up this week and I’m never opposed to checking out something new. If a mass computer virus in the form of a hot chick is your thing then you might really enjoy this book. I’ll be picking up the next issue to see where the story takes us so be sure to check back and find out where we’re taken next.