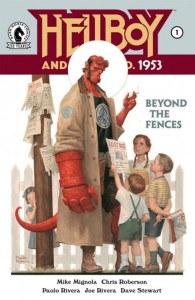 My tenure with Hellboy began only a short while ago, but with a large collection of supernatural adventures on the market I’ve been able to dive into it head first. Hellboy and the B.P.R.D 1953 is the newest adventure.

Hellboy and the B.P.R.D is an ongoing series of one-shots penned by Mike Mignola, the creator/long time writer of Hellboy. Beyond the Fences is a new three part series that sets the B.P.R.D on the trail of a mysterious creature that’s been hunting in an idyllic suburban town. It’s escalated quickly from pets to children and then adults. As the team investigates, they get more than they bargained for when their investigation begins to seem familiar. Beyond the Fences is setting up a big adventure, and with only two more issues planned in this storyline, fingers crossed that they’re not setting up anything too large to satisfyingly finish in the allotted time.

The art throughout Hellboy and the B.P.R.D is pretty standard fare, comparatively, in the Hellboy series. Fans of Mike Mignola’s character should know what to expect. Beyond the Fences is a little different though as it’s stylized into a more cartoony design. There’s a fair amount of details throughout the piece but they’re included more to create atmosphere than realism. The colours are cleverly done throughout as well. While muted and dull in the government B.P.R.D buildings, they become bright pastels out in the field. And, of course, Hellboy is the brightest, most vivid thing in any panel, but it’s hard not to make him that, what with him being a near seven foot tall, solid red demon.

Verdict
Buy it! It’s only going to be a three issue story arc, but it’s an interesting story with compelling artwork nonetheless. The characters are on-point, the supernatural element is sure to please, and, c’mon, it’s Hellboy!