Nameless #1 is a heavily layered sci-fi/occult comic from the minds of writer Grant Morrison (Batman Incorporated, All-Star Superman, Doom Patrol, the Invisibles, Multiversity) and artist Chris Burnham (Batman Incorporated, The Amory Wars: In Keeping Secrets of Silent Earth: 3). It’s a comic that I can imagine was not just written, but designed and constructed, in 3-D, inside of Morrison’s head. Burham does an excellent job of bringing Morrison’s characters and environments to life, helped in large part by Nathan Fairbairn’s powerful and primordial colors. Along with letterer Simon Bowland, Morrison and team have created a fun, dark, mysterious tale with Nameless #1 — each page and each panel contains multiple meanings, some obvious, others half-hidden or more. 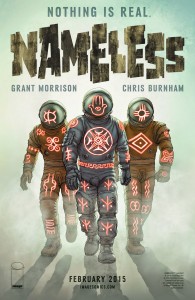 On page one, Grant Morrison sucks you in by giving you the POV of the main character, a man named Nameless. As Nameless reaches forward to open a door that has a sigil painted on it, mirrors on both sides of you reflect into each other. A page or so later, Nameless opens the door, effectively transporting him to another universe (or the anti-universe) where the adventure kicks off. It’s interesting to note that as there are several other panels in which the POV switches to that of Nameless’s, with the majority of the panels having something to do with his hands. This shift in point of view and the focus on the main character’s hands is one of many quirky and interesting aspects of the storytelling in Nameless #1. Other examples include the varied styles and shapes of the panels (some are standard while others seem to bend and distort perceptive), and the emphasis on open and closed eyes (“seeing” and perceptive in general seem to be themes).

The main story thread of Nameless #1 is actually easy to follow (especially on second read). Basically, Nameless is an occult expert who steals a key (the Dream-Key of Nan Samwohl to be exact) from the bad guys (at least them seem bad…) and is then recruited by a rich “space scientist” to help protect a crew of people who have a plan to prevent an asteroid (that is already somehow causing murderous chaos on Earth) from colliding with Earth. Next stop…the moon, where their mission begins.

Sprinkled throughout Nameless #1 are a ton of occult symbols, imagery, and words. I don’t think a page goes by without a call-out of some sort to either astrology, tarot, numerology, or other magic or spiritual systems/beliefs. Perhaps Morrison is so heavy handed with the obscure (some more than others) occult and spiritual references in order to hammer home the fact that the character Nameless is indeed steeped in such things, qualifying him as an expert. Whatever the reason, I personally enjoy these references. I literally have over a dozen Chrome tabs open trying to figure out what all these things mean — and that’s half the fun for me with this book.

Buy it! Grant Morrison is not everyone’s cup of tea. He’s a great storyteller though, who weaves incredible stories about emotions, dreams, power, and human potential. If you’re already a fan of Morrison, you should know what to expect. If you’re new to Morrison, go into Nameless #1 knowing there’s a lot to absorb and a chunk of it won’t make sense until further down the road. Have patience — the payoff is sure to be huge.

From this point downward, you’ll find explanations and origins of some of the occult and esoteric references made in Nameless #1. This section will updated sporadically as I compile more data.

In Nameless #1, a giant asteroid is on a collision course with Earth, and it seems that as it gets closer, incidents of terrible violence increase. In the first couple of pages of Nameless #1, we see the aftermath of two examples of this horrific violence, in which men (appear to) have horrifically murdered their families. In one of these scenes the words zirom, trian/m, ipam, and ipamis are written in blood on a wall. In the other, a man who is being dragged out of his house by police yells the words/phrase. What do these words mean? Where do they come from? I did some Googling and discovered that these words are a part of the Enochian language and can be translated into English. The words belong to the Hermetic Order of the Golden Dawn system of magic, which details the workings and meanings of Angelic magic. In my research; I discovered what are called the the Forty Eight Angelic Keys or Calls, which zirom, trian, ipam, and ipamis could be considered a part of. The text I was researching (the Complete Golden Dawn System of Magic, Vol. 10, by Israel Regardie) presented the below warning:

These Calls or Keys which follow are only to be made use of with the greatest care and solemnity; especially if they be pronounced in the Angelical Language as given. Anyone profaning them by using them with an impure mind, and without a due knowledge of their attribution and application, shall be liable to bring serious spiritual and physical harm unto himself.

So apparently, the Angelic words left or spoken at the murder scenes in Nameless #1 were all forms of the “being” verb. So what does it all mean?? Only God and Morrison (and his editors) know at this point, I’m sure. Perhaps Nameless #2 will shed more light on the matter!

Leitch, A. (1999). The Whole Enochian Dictionary. Retrieved from http://www.gclvx.org/.