It’s really no secret that I really love this book. Not just this particular issue but the series in general. Issue after issue Dan Slott finds ways to up the ante for Spidey without consequence to the overall story. Without a doubt Slott has become my personal favorite Spider- Man writer. Its my hope that he stays on this book for as long as possible. 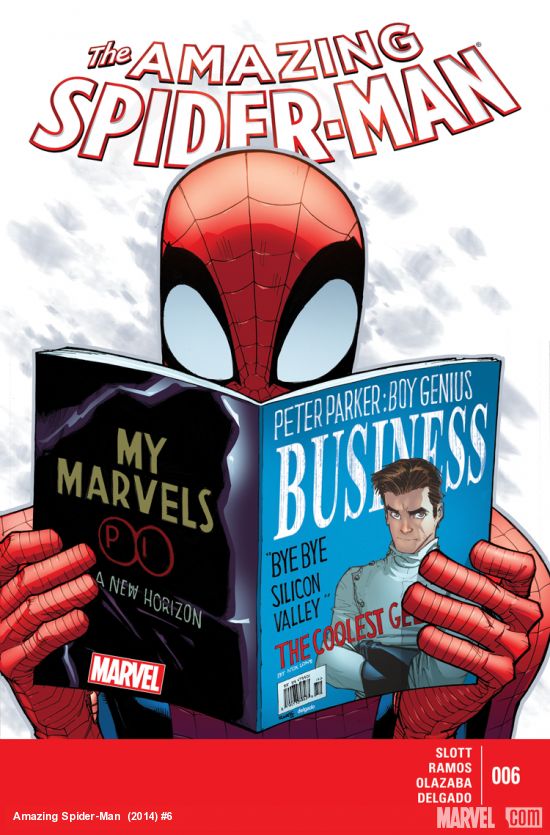 With Dan Slott you’re going to be getting a lot of things crammed into one issue. That being said, this issue gives us a little of everything. Peter being helpless, Peter going above and beyond to help someone, action, romance (if you can call it that), and lots of Silk. It’s a busy issue for sure but Slott makes it work.  Although she’s only been around a few issues I’ve found myself really taken with Silk. In comics sometimes a new character is reduced to a recurring background role and sometimes that character really takes off and becomes something more. I’m hoping for the latter with Silk. She’s enjoyable to read and it’s funny how much more she knows about her abilities than Peter. She’s becoming really fun to read and root for.

I’ve openly worried about the state of Anna Maria, I didn’t want to see her reduced to the Mary Jane role where she’s only covering for Peter. She takes some nice steps here to ensure she’s not going to turn into that. I mentioned it earlier but seeing Peter try and save Electro at the risk of his own life is why I love this book. Slott really understands how to write those moments. While I’m not behind the Black Cat’s huge revenge storyline, it is entertaining to read. After being an ally to Peter for so long it’s interesting to see her step out of his shadow and do something different.

While I feel that once again I could sing the praises of Humberto Ramos for the amazing (pun intended) work he does in this issue, instead what caught my eye here was the color work by Edgar Delgado.  All of the book looks great but the Electro battle scene at the end of the book is completely and totally enhanced by those colors.

Buy it. Each issue of Amazing brings us closer to Spider-Verse. With Silk basically stealing the show, I’m excited to see what Slott and company have in store for her. Oh and that Peter guy too.