The idea of Apes rising up as a civilization on the wreck of human hubris is one of those ideas that demands to be adored by every generation of six year olds that encounters it. That six year old stays inside us forever.

I did, indeed, start reading Planet of the Apes comics when I was six years old. Around the time when Battle for the Planet of the Apes — the last of the original pentalogy — was shown on television for the first time, and CBS released its charming, but ill-fated POTA series. Marvel (Curtis) released a black-and-white mag adapting the movies (the adaptations were then reprinted in a color comic).

But really the big deal were the original stories. Marvel printed a number of stand-a-lone stories of apes and humans, and one ongoing feature  Terror on the Planet of the Apes, featuring early work by the great Mike Ploog. This was good stuff! The idea of filling in the gaps — not sequels, not prequels, but interquels — struck my young mind as genius. Then in issue eleven of the Apes mag, Chris Claremont (yes, that, Chris Claremont) wrote a text piece laying out the timeline of the Apes franchise, starting in 1968 (George Taylor and crew launch), and ending shortly after 3975 (spoiler: end of the world). Inside this time line he included all of the Marvel original stories, included the television series, and left a lot of space for more stories.

And there was that time-loop, paradox thing. Wow. For every great idea, there is that moment when any person encounters it for the first time. That was it, I would forevermore be a citizen of world geek, ruined for polite society.

It has been the comics that have kept the promise made by those gaps in the time line. More stories. The POTA license has floated around between any number of companies, with Malibu and Dark Horse both having good runs. BOOM! Studios took up the banner in 2011, keeping faith with great stories, the fans, and the franchise. They are committed to the idea that all of it … all of the iterations … can work together into one continuity.

BOOM! does two types of Ape stories. Their ongoing series told the story of a maybe-utopian city-state, Mak, led by the Lawgiver, set about twelve hundred years before Taylor and Zira have their first kiss. Humans and apes live in uneasy peace in this city until the Lawgiver is assassinated (no spoiler, it happens in the first issue). The story itself is excellent. The characters are great, with the Lawgiver’s two daughters, one of whom is an adopted human, respectively leading their factions. There are any number of ape cities — including Ape City — with economies, crime, politics, industry, intrigue, etc. It’s a nice job of world building, both in its own right, and in terms of answering the sort of questions which fascinate the sort of person I am. (e.g., Why could humans talk perfectly well in the television series, but were mute a thousand years later when Taylor showed up? Why is “Zaius” such a popular name for orangutan babies?) Also, the apes have zeppelins. 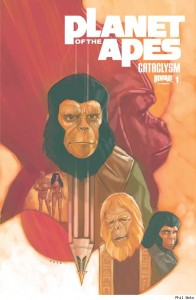 The other set of BOOM! stories have to do with Ape City in the years leading up to Taylor’s fall from the sky. Zaius, Cornelius, Zira, and Lucius all show up in these tales, which, again, are great in their own right, while knitting together the fascinating skeins of ape continuity. The best of these is Planet of the Apes: Cataclysm, a maxi-series that explains, among other things, why astronauts couldn’t recognize that they were on Earth by, y’know, looking at the sun, the moon, and the stars (hint: it’s a good reason).

Finally, in all BOOM! ape stories, the mutant telepaths show up, doing nefarious things. We hate them. Grrrr.

So, now, BOOM! is promising to do its simian magic with the Andy Serkis ape world. (Who would have thought anyone could wrestle ape primacy from Roddy McDowell?). Am I excited?

Yes, I am excited.