I, not unlike Sinestro, checked out of the corner of the DC Universe where the Lanterns live after Geoff Johns left Green Lantern. I tried to get into new creators and a new direction, but it just wasn’t working for me. At that time, Green Lantern: New Guardians was an okay title, Red Lanterns was something of a joke, and the main Green Lantern title was propping them both up. Now, as I understand it, New Guardians is the joke, Red Lanterns is where the fans are flocking, and Green Lantern has become a big, “eh.” If there was ever a time when we needed the hero of Korugar, it’s now. Fortunately, i think I have some good news. 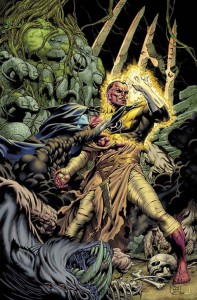 Sinestro #1 begins with the man himself kneeling by a fire on some distant and savage world. He looks and speaks like a monk. Now, for the story purists out there, you will notice an issue here: when we last saw Sinestro, he had taken the Paralax entity into himself and become a sort of super yellow lantern. This is not how we find him. Cullen Bunn has made the decision here to strip down Sinestro, start him with almost nothing. The character explains it, but only briefly, saying that his struggle with Paralax is over. At first, the difference bothered me, but with the story that Bunn is trying to tell here, I think it makes a lot of sense to take the man down to nothing–if for no other reason than so he has somewhere to build up to. And, what I find most interesting about Sinestro in the beginning of this book is that he is no longer afraid. He has no fear with which to power his yellow ring. He is still a formidable opponent for the savage animals that try to make him a meal, but he’s given up the fear that made him a yellow lantern. Enter Lyssa Drak, the keeper of the chronicle of the yellow lanterns and the storyteller we saw in the pages of the Sinestro Villain’s Month issue. She has finally found the greatest of the yellow lanterns and she spends the next several pages of the book trying to convince him to return to the corps. The only thing that compels Sinestro to return is the news that not all of the people of his former home, Korugar, died in the explosion that consumed the planet. Some of Sinestro’s people still live–exiled, adrift, and without guidance. This is the moment when the power returns to Sinestro–the moment when he finds his fear again. Fear for his people, who seem to be lost without him. He decides then to find the rest of the Korugarians, and in the process reunite his fallen corps, which is under new leadership.

The thing I like about Sinestro #1 is the very thing that will divide an audience over it: the drama of it. When the characters speak or think in Sinestro, it’s with that air of high drama, like greek or norse mythology, like medieval legends, or like some silver age comics. If there is one thing that Cullen Bunn does very well, it’s finding his character’s voice, and Sinestro is no exception. There was a part of me that wanted to roll my eyes at all of the high handed dialog, but then, once I thought about it, I realized that it’s what Sinestro is all about: the self-righteousness, the unwavering confidence, and, of course, the drama.

Dale Eaglesham does some great work here, helping to bring all of that drama to life, even through several pages of heavy dialog between Sinestro and Lyssa Drak. There is a point where Sinestro fights a thing that looks like a tiger, but with four eyes and about twelve legs, and the thing looks powerful and scary instead of silly, as it might under another pencil. Colorist Jason Wright also does a wonderful job here, not only by keeping the flashbacks and current action separate with different color palettes, but by playing with the ever important yellow. Current action scenes are cool blue and purple until just the right moment, and then explode with fiery gold.

Wait and see. If you’re a fan of the Lantern universe and have been looking for something to sink your teeth into, this is your chance. If you’re a stranger to the color corps, then I have to offer a word of caution. While the issue does provide a lot of back story about Sinestro, I don’t think it’s going to be very friendly to the uninitiated. And then there is that drama thing. If you find yourself rolling your eyes at Thor, for example, then you should probably pass this one by. But, if you’re already familiar with Sinestro’s brand of bravado and banter, then rest assured that the man is back and seems to be in very good hands.