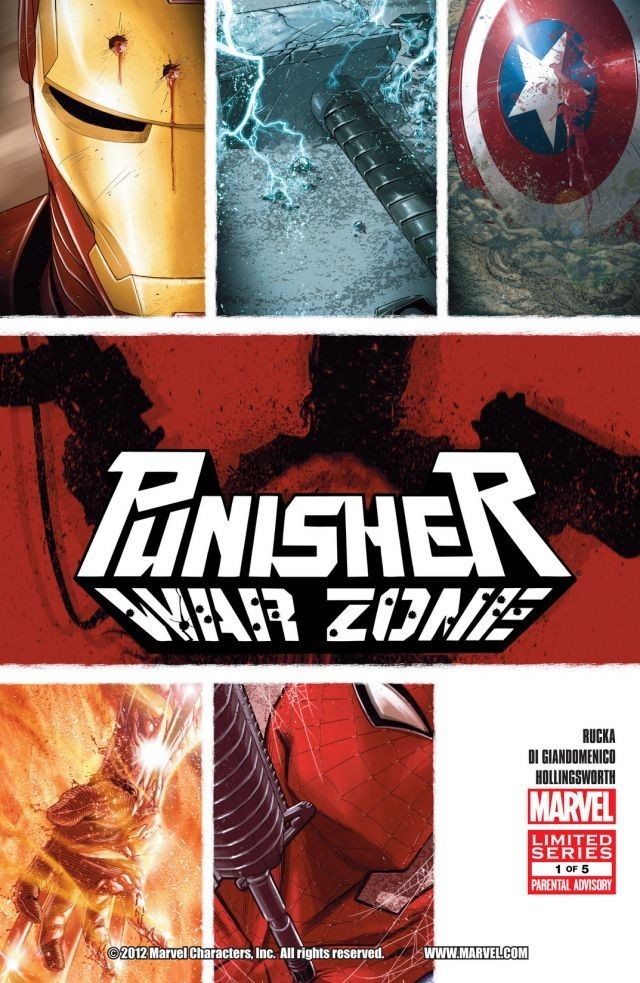 For sixteen issues we have watched as Greg Rucka has reinvigorated the ongoing tale of Frank Castle, by surrounding him with a wealth of fascinating characters, who bring shades and depth to a man usually defined only by bloody revenge. Throughout Rucka’s run on the title, there has been an emphasis on the differences between those, who find The Punisher’s actions to be a necessary evil, and those who downright despise his dirty deeds.  Rucka himself stays neutral, allowing the reader to decide what they feel about Mr. Castle and his brutal behavior. In doing so, I think the writer manages to slip us right into the mind frame of the residents of the Marvel Universe. They all know Frank is unbalanced, murderous and slightly insane, but he also sticks to eliminating scum. So, even though they don’t agree with his actions, they pretty much let him be as long as he doesn’t go “too far.”

Now, Frank Castle has gone too far. He has allegedly killed three cops and a building of innocent civilians which has sent the full force of the NYPD down upon him.  However, a squad of angry copsvis the least of The Punisher’s problems. You see, Castle made the mistake of using a bit of Spider-Man tech during this altercation and that has led to him showing up on the radar of the Web-Head himself. This is the set up for Greg Rucka’s swan song with Frank and Punisher: War Zone #1 is a great beginning of the end, all be it one that suffers greatly from the absence of artist Marco Checchetto

It feels fitting that Spidey is the one who brings this street level story onto the bigger stage. After all The Punisher first appeared way back in Amazing Spider-Man #129 and has often butted heads with the Wall Crawler since that time. It’s a testament to the skills of Rucka that you can feel that history as the two characters meet in the pages of this book. Here, Peter is using his sarcasm and wit, not as a defense mechanism, but as a weapon. He is furious at Frank for using something he invented to kill someone and this fills the scene with a level tension I didn’t expect.  I suppose I shouldn’t be surprised though, as Rucka has thrived on making an art out of the way people react to the actions of his main character.

There is only one moment where these reactions feel less than authentic, and that moment comes when Spider-Man is trying to convince the Avengers to take care of the “Frank Castle problem.”  To be fair, it’s one character that rings false and that’s Tony Stark. He shows up to the meeting like he just walked out of the opening scene Iron Man 1, he’s brash, insensitive, and uninterested in listening to his fellow Avengers’ opinions. This characterization does not gel with the Stark we’ve been seeing in AVX or any other title that features him. In fact his bad attitude strikes me as nothing more than a plot point, a way to bring a little dramatic tension to the scene, and that’s not good writing. It’s an uncharacteristic blemish on an otherwise stellar series.

The only other complaint I have about Punisher: War Zone #1 is the art, which can’t hold a candle to the work of series regular Marco Checchetto. His work was reminiscent of a David Fincher film, but that dark and grimy intensity has been lost with Carmine Di Giandomenico taking over penciling duties. Now, the book is more cartoony and has an odd glossy sheen, this makes it less Fincher and more generic action film.  It’s possible I’m being unfair to Mr. Di Giandomenico, that I’m simply suffering from withdrawals from one of my favorite artists, but even if thats the case I found the change in looks to be incredibly jarring.

Buy It – Even with the poor Tony Stark characterization and disappointing art, Greg Rucka’s Punisher War Zone #1 is a great opening note in a sure to be satisfying swan song. I loved the use of Spider-Man as the catalyst for Frank getting on the Avengers radar, and I especially loved Castle’s interaction with a certain character at the end of the issue. It leads to some very interesting questions being raised about allegiances and how this whole war will turn out. I can’t wait to see what’s coming next.