FacebookTwitterPinterest
Issue #42 tells me that Powell is kicking things into a high gear for The Goon and preparing a lot of development for Goon's long time nemesis: The Priest. 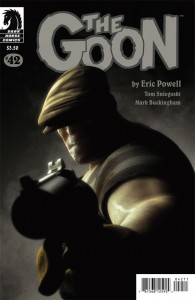 Issue #42 tells me that Powell is kicking things into a high gear for The Goon and preparing a lot of development for Goon’s long time nemesis: The Priest. Let me just say this issue rewrites some rules, so getting to know issue #41 for the foreshadowing and reading this one will be essential for issues #43 and beyond. Issue #42 continues to bait the hook for an awesome arc and introduces the new threat on Goon’s turf. The best part? The Priest makes a comeback to give us a great perspective of the new threat and what he plans for Goon. Something interesting I saw in this issue was that we’re reminded that Goon isn’t really that much of a saintly hero. You might compare Goon to something of a Judge Dredd type of character, a protagonist that might be as bad or worse than the problem given the right circumstances. In an even more surprising way, we’re also shown villains that aren’t always so villainous. If the villain could ever be heroic would be a real question I’d love to see answered in the coming issues.

I briefly spoke with Powell at Baltimore Comic-Con and he mentioned that the coming arc would be, “a lot darker.” Consider me very excited to see what develops after this issue.

I thoughly enjoyed this issue. The characters were great, and it was refreshing getting a real villain back in the works coupled with The Goon’s monster-of-the-week hilarity.

The Rocketeer: Cargo of Doom #1 Review