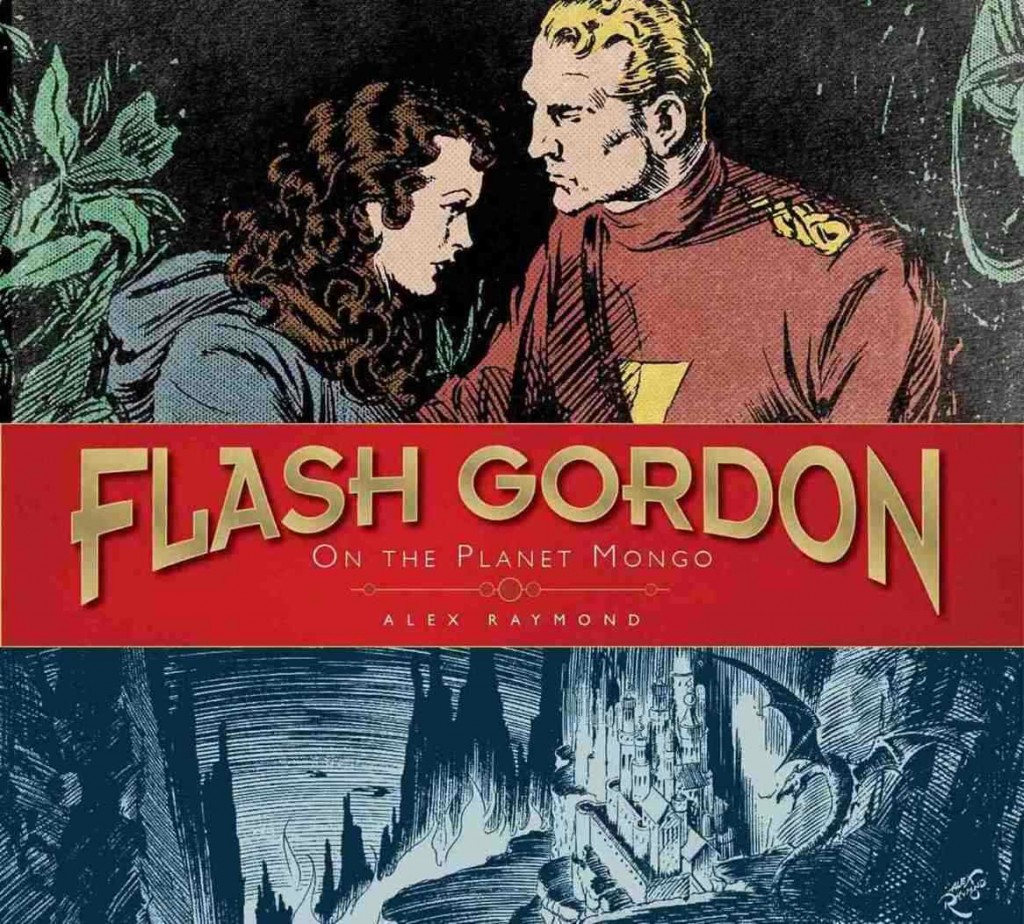 On the Planet Mongo

Of late, I’ve found myself re-visiting classic adventure comic strips of the early 20th Century, sparked by Trina Robbins’ appearance on the Talking Comics podcast, and her loving recitation of the history of artist/writer Tarpe Mills and her creation of the first costumed super-heroine, Miss Fury. I’ve been looking back at Hal Foster’s Tarzan and Prince Valiant (which is still being published in Sunday papers, now with stories from Xenozoic Tales’ Mark Schultz), Chester Gould’s Dick Tracy, and the other-wordly brilliance of Winsor McKay’s Little Nemo in Slumberland, which features some of the most stunningly detailed art to ever appear in any medium.

Filling a need, almost as if on cue, on September 25th Titan books will release the capper to them all, a glorious hard-cover collection entitled Flash Gordon: On the Planet Mongo that compiles the first three years of the Sunday strips by writer Don Moore and artist Alex Raymond.

As most of you, I first encountered Flash Gordon via another medium, in my case the 1930s Universal Studios movie serial adaptations featuring Buster Crabbe as Flash. Over the years, I have seen bits and pieces of the original strips, and while it was simple to see the stunning quality of Alex Raymond’s art, without the ability to peruse an extended sample, a true appreciation of Flash Gordon was impossible.

With this volume, the first of three that will comprise the complete Moore/Raymond Sunday strip run, Flash Gordon’s claim to be being the greatest adventure comic strip is validated. The pain-staking restoration of these pages by Peter Maresca is breath-taking. Much of Mr. Raymond’s fine-line detail work has been obscured by poorer reproductions in past years, but here, those intricacies fairly leap off the page. I’m also particularly impressed with the color palette in use; a more subtle approach that is certainly more accurate to the printing technology of the era, but that is still vibrant and complimentary.

Flash Gordon was not the first science fiction comic strip, Buck Rogers in the 25th Century having debuted in 1929, nor was Flash’s origin cut from whole cloth, as it owes a bit to Edgar Rice Burroughs’ John Carter of Mars, but writer Don Moore assembled a fine stew of his own, and hit the ground running in the first strip of January 7, 1934, introducing us to scientist Dr. Hans Zarkov, who in an effort to save the Earth from a cometary impact, launches a rocket ship carrying himself and his two reluctant companions, Yale polo player “Flash” Gordon and his new acquaintance, the lovely Dale Arden. There’s villainy afoot behind the comet, in the form of the “Emperor of the Universe” Ming the Merciless and his fickle daughter, Princess Aura, as well as underwater cities, forest creatures, hawk-men and monsters galore.

Not to slight the rollicking stories, but the masterful illustrations of Alex Raymond are enough to move the plot forward on their own. Mr. Raymond was 25 when Flash Gordon began, but had been drawing since he was a young boy, and after some formal instruction, found himself plucked from the King Features art department to co-create a competitor to Buck Rogers. From the start, his work displayed the grace of veteran hands in lay-out and pacing; what is most fascinating in this volume is the opportunity to watch his style mature, as within a year his confidence and technical abilities grew to the point that these strips are truly works of art, and you’ll find that you don’t want to turn the page.

Alex Raymond’s art would influence the burgeoning comic book world, as the Krypton of Siegel & Shuster’s Superman owes quite a debt to Mr. Raymond’s Planet Mongo, and in the early years of explosive growth of comic book publishing, harried and rushed artists would employ “swiped” poses, and sometimes entire sequences straight out of Flash Gordon, the “Hawkman” series being a prime example! Additionally, those of you who are “Star Wars” fans (I know you’re out there!) will find any number of …how can I say this charitably… reference points and touchstones that George Lucas would utilize in creating his universe.

As full disclosure, let me say that I’m only about half-way through this amazing book, preferring to savor each weekly installment at a more leisurely pace more befitting the time period of it’s production; but I have peeked ahead, and though this volume ends in the midst of a story, that should not dissuade any fan of comics artistry from adding this essential collection to their library.

VERDICT:   This book stands as a testament to the genius of Alex Raymond, and will hopefully help to re-introduce readers to the wonder that adventure comics strips once were, but will sadly never be again.

ADDENDUM:  There are two excellent and informative introductory essays included here. The first “The Flash Gordon Legacy” by Alex Ross is a personal journey through the history of the character, while the second essay “Birth of a Legend”, gives us a glimpse into the worlds, both real and fictional, into which Flash Gordon emerged, and is written by comic book veteran Doug Murray, a personal acquaintance of many years, and whose work is always a pleasure to encounter.

FURTHER READING: The next two volumes in this series are due in December from Titan Books!