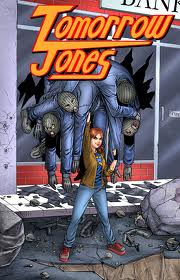 It has been said that 2012 is the year of the indie creator, and Tomorrow Jones is a wonderful example.  Tomorrow Jones is the story of the title character who is a fourteen year old girl who despite the efforts of her parents who want her to fit the mold of what they believe a superhero should be, is trying to find her way in the world.

Tomorrow’s teenage rebellion is her refusing to conform to what society tells her she should be be. She refuses to wear the skin tight costume that her mom passes on to her. Instead she decides to fight crime in the clothes that she wears on a daily basis. In spite of her dad focusing on her brother and not on her, Tomorrow excels in her knowledge of superhero situational awareness and her fighting skills.

I found this comic to be outstanding. In the midst of people in comics and the geek world talking about women in comics, Tomorrow Jones is a comic that stands out from the crowd. Tomorrow is an example of how women in comics should be portrayed. Daniel’s writing and Manadin’s artwork are on point.

Verdict:
Buy this book. If you want a book that goes against the grain, that shows a female character in a non stereotypical manner, and just want to read an awesome book that features a character that kicks ass, Tomorrow Jones is the book for you. Also, you can read the Brian Daniels Interview that I did a few months ago here and check out the comic’s preview page here.