This superheroine has been around kicking butt for a long time-since 1941.  I was introduced to her by watching the Justice League and Justice League Unlimited animated series and now I’m currently reading her new comic book series in the DC New 52. So far I’m enjoying the new 52 story of Wonder Woman.  I’ve never read any of the stories pre-relaunch, so I’m glad for the DC relaunch. If you’ve never read Wonder Woman there are a few things you should know about her:

She’s a warrior princess of the Amazons (based on the Amazons of Greek mythology) who live on the island of Themyscira. 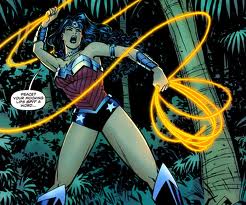 There was going to be a live-action TV show on NBC-starring AdriannePalicki-but it was canceled before the pilot even aired. In the past, there has been a push by a lot of fans for a Wonder Woman film but it was in development hell for a long time. Recently, there is some hope that a film will be made soon. As a result of The Avengers film being extremely successful, there has been a new push to create a Justice League film. Also it’s been reported that Michael Goldenberg (a co-writer on Green Lantern) is reportedly at at work scripting the Wonder Woman movie.

Hopefully there will be a live-action film that features her-whether solo or on a team-in the future. For now, there’s plenty of Wonder Woman out there for you learn about and enjoy the character! Check out this awesome Wonder Woman Theme Song Mix video by YouTube user TazDamianDevil!